Struggles behind him, Tyler Herro ready to lead Heat against 76ers 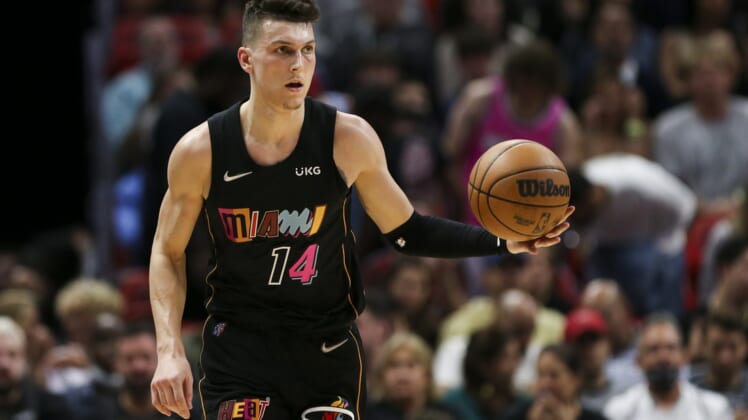 The Eastern Conference-leading Miami Heat will be searching for their third consecutive victory when they battle the host Philadelphia 76ers on Monday.

The Heat won with Jimmy Butler (ankle), Gabe Vincent (toe) and Victor Oladipo (back spasms) sidelined. Butler is listed as questionable while Vincent and Oladipo are expected to be out against the Sixers.

Herro also tweaked his left ankle against the Thunder but returned after a brief trip to the locker room.

“He brings it every single night,” Robinson said of Herro. “As a young player, it can be tough to establish that. He’s establishing himself as a star.”

Herro and Butler each average 21.1 points per game to lead the balanced Heat.

After struggling for portions of last season, Herro has responded in a big way as the Heat have become contenders for an NBA title.

“If last year didn’t happen, I probably wouldn’t be where I’m at right now,” Herro said. “I just took it as motivation to get myself better, mentally and physically.”

With the playoffs approaching, Heat head coach Erik Spoelstra is looking for ways to get rest for some of his players. But key role player P.J. Tucker would rather play.

“Every time I’ve suggested it, he’ll just laugh in my face,” Spoelstra said. “Sometimes he’ll scowl at me. With the schedule right now, I don’t think we have to rest him. We’ll see when we get there.”

The Sixers will look to rebound with a difficult back-to-back when they host the Heat.

Philadelphia fell 93-88 to the short-handed visiting Toronto Raptors on Sunday after giving up an early 16-point advantage.

Harden was whistled for a controversial flagrant foul on a drive to the basket with 2.7 seconds remaining. Harden’s elbow made contact with Chris Boucher’s chin and the Raptors dropped in three free throws to seal the win.

“I don’t think we had the right approach,” Rivers said. “Don’t know why. Everyone stood around and watched each other play.”

It’s unclear whether Embiid will play against the Heat. The Most Valuable Player candidate competed in his 58th game of the season against Toronto and his career-high is 64 in 2018-19.

The goal for the Sixers is to obviously have Embiid as healthy as possible for the playoffs. Philadelphia sits in third place in the Eastern Conference, 3.5 games behind the Heat.

“I’m gonna listen to them. I know they have their options and they were gonna talk to me,” Embiid said of the medical staff. “Obviously, I’ve been on the court. I haven’t missed really any games besides those COVID times so I’m gonna listen to what they have to say, but the goal is obviously to win a championship. At some point, you gotta think about what’s gonna take us there and I have to be extremely fresh for the playoffs so I would imagine I will sit a game or two to finish the year.”