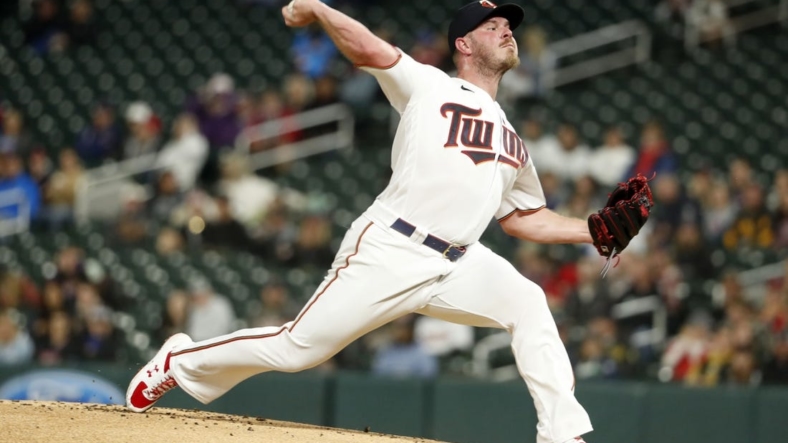 Right-hander Dylan Bundy takes the mound on Thursday night as the Minnesota Twins try to complete a three-game sweep of the Kansas City Royals in Minneapolis.

Bundy (8-7, 4.68 ERA) will try to build on two outstanding starts by Minnesota pitchers in the first two games of the series.

On Tuesday, Joe Ryan tossed seven no-hit innings and Minnesota held the Royals hitless for 8 1/3 innings in an eventual 6-3 victory. Sonny Gray followed that up by allowing three hits over seven innings in the Twins’ 4-0 shutout of Kansas City on Wednesday.

A sweep of the Royals would give the Twins, who trail first-place Cleveland by five games in the American League Central, some crucial momentum heading into a five-games-in-four-days series with the host Guardians starting Friday night.

Ryan and Gray became the first Minnesota pitchers to have back-to-back seven-inning starts since Michael Pineda and Jose Berrios did it in 2019.

Even more impressive is that they also became the first Twins starters since Brad Radke (Sept. 2, 2004, vs. Texas) and Johan Santana (Sept. 3, 2004, vs. Kansas City) to have back-to-back games of seven shutout innings or more. The duo allowed a combined three hits and three walks over 14 innings while striking out 17.

Gray improved to 7-0 with a 1.00 ERA in his past seven starts against the Royals. His 1.66 career ERA against Kansas City is the best of all time among pitchers who started vs. the Royals at least nine times, with Hall of Famer Tom Seaver second on the list at 1.77.

“He was pretty tight on the corners,” Royals manager Mike Matheny said of Gray. “That mix (of pitches) again, we really didn’t know which pitch was coming. He made pitches when he had to.”

Minnesota manager Rocco Baldelli said, “That’s really what everyone showing up at the ballpark is hoping to see from him. He was super sharp from beginning to end. … Command was really good. I thought he looked great.”

Gray was asked if Ryan’s no-hit bid on Tuesday motivated him going into his start.

“Yeah it did,” Gray said. “I gave up a hit in the (third) and I was like, ‘Dang!’ … That was impressive last night. We just want to keep this thing rolling.”

Bundy enters his Thursday start with a 2-2 record and a 4.08 ERA in nine career appearances, eight starts, against the Royals (57-86).

Left-hander Daniel Lynch (4-10, 5.14 ERA) will try to salvage the series finale for Kansas City, which has lost six straight meetings with the Twins. Lynch is 1-2 with a 4.50 ERA in five career starts against Minnesota, 1-2 with a 4.05 ERA in four outings this year.

Minnesota first baseman Luis Arraez’s availability is a question mark heading into the contest. Arraez, who leads the American League with a .320 batting average, exited the Wednesday game due to left hamstring tightness after leading off with a single and then coming around to score later in the first inning.

Baldelli said afterward that Arraez, who grimaced slightly taking third on a Carlos Correa single, had an MRI that showed “nothing significant.”

The manager added, “We’re going to just see what he feels like (on Thursday). I do think, though, he’s going to be available relatively soon.”