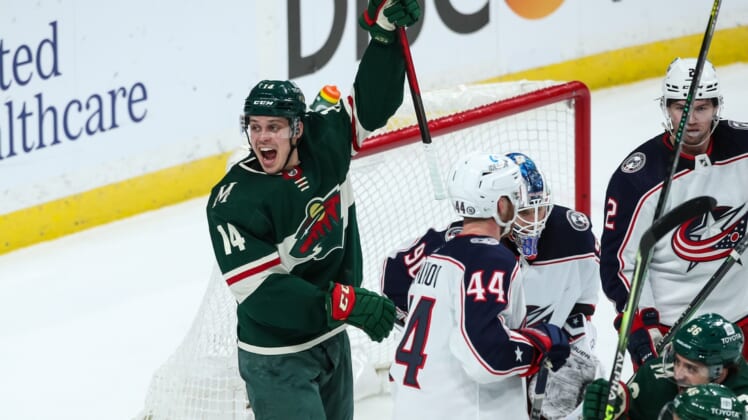 The Minnesota Wild will aim for their sixth win in a row when they face the Colorado Avalanche on Sunday evening in Saint Paul, Minn.

Minnesota is coming off a dramatic 3-2 overtime win against the Columbus Blue Jackets one night earlier. Kirill Kaprizov scored the tying goal with 1:03 remaining in regulation and an extra attacker on the ice, and defenseman Jared Spurgeon netted the winner on a backhand shot 1:24 into the extra session.

The comeback gave Marc-Andre Fleury a victory in his team debut with the Wild. The veteran goaltender made 23 saves on 25 shots.

Rather than start Fleury on back-to-back nights, the Wild plan to start Cam Talbot in net on Sunday. Talbot, who is 26-12-1 with a 2.82 goals-against average and a .910 save percentage on the season, is riding a career high-tying run of seven consecutive victories.

Talbot and his teammates could have their hands full as they try to slow down the NHL-leading Avalanche.

Colorado is coming off a 6-3 win over the Philadelphia Flyers on Friday night, the Avalanche’s fifth win in six games. All but one of those victories came by multiple goals.

Speaking of goals, Cale Makar will look to stay hot after making franchise history against the Flyers. Makar scored his 23rd and 24th goals of the season, the most by any defenseman to play with the team. He eclipsed the previous mark of 23 set by Sandis Ozolinsh in the 1996-97 campaign.

“It’s pretty special,” Makar said. “I sound like a broken record, but those goals go back to the team. It’s awesome to achieve something like that, but at the end of the day, we’re focused on this last run of the regular season.”

The Avalanche are waiting for word about when Artturi Lehkonen, acquired from the Montreal Canadiens on Monday, will be able to make his team debut. Lehkonen was attempting to clear up his immigration status.

“I’d like to see him get in,” Avalanche coach Jared Bednar said, “but we haven’t heard anything yet. We’re kind of in the same holding pattern. He’s doing morning skate, getting ready, he’ll sit in the meetings. If we get word that he’s good, he’ll play.”

“You’ve got to believe in yourself that you can do it,” Eriksson Ek said. “Last year, I got to play a little bit more and build up some confidence and carry that into this season.”

“He just plays the exact same way each and every night,” Wild coach Dean Evason said. “Plays the game hard, physical, and he has a skill set to finish and score goals and make plays. (He’s a) big part of our hockey club.”