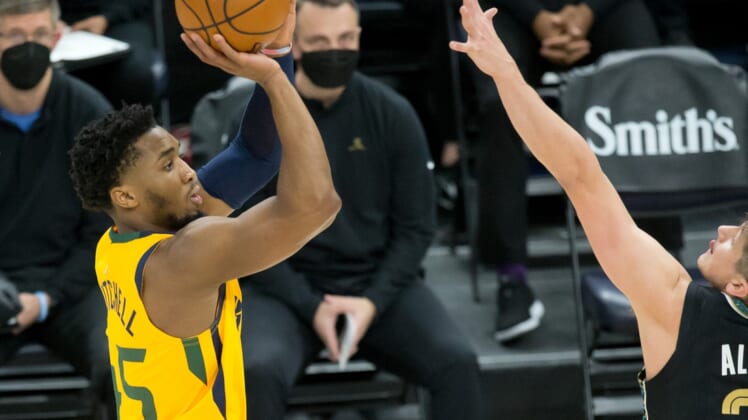 Utah’s comfortable 114-75 home win over the Cleveland Cavaliers on Monday night was the fifth consecutive game in which Utah led by 20 or more points, its eighth wire-to-wire victory, and its largest margin of victory this season.

The Jazz will try to extend their six-game winning streak on Wednesday night when they take on the Grizzlies in Memphis.

“(Monday night) was probably one of our best games in terms of consistency defensively,” Utah forward Rudy Gobert said. “Just about every minute on the court, for everyone that came in, they were locked in defensively.”

Donovan Mitchell led a balanced scoring effort with 19 points while Gobert totaled 18 points and 17 rebounds. Mike Conley also had 18 points as the Jazz led by as many as 41 and used a 17-0 third quarter surge to put the game out of reach.

Mitchell played only 25 minutes in Monday’s game, but he continues to light up the scoreboard particularly since the All-Star break averaging 29.2 points over Utah’s past 10 games while shooting 50 percent overall and 46.3 percent from 3-point range.

“I think my film work is the biggest reason,” Mitchell said. “When you can’t always get the physical reps in a shortened season and you need to rest your body, it’s the mental things of understanding how teams are going to guard you, what’s going to be open and manipulating the situations to get anything you want,” Mitchell said.

The Jazz swept a back-to-back set against the Grizzlies last week in Utah and will look to complete a season sweep. Mitchell scored 35 points in each of those games.

Memphis bounced back from those defeats with a 120-110 win over the Rockets in Houston on Monday led by Jonas Valanciunas’ season-high 30 points and 15 rebounds. The Grizzlies beat Houston by a franchise-record 49 points in their prior meeting, but trailed heading into the fourth quarter until Valanciunas hit a pair of late buckets to help them pull away.

Valanciunas is averaging 17.3 points and 15.3 rebounds while shooting 59.4 percent in 11 games since the All-Star break.

“Down the stretch our defense was solid,” Memphis coach Taylor Jenkins said. “We did a great job rotating and making them take heavy, contested shots.”

Memphis, which had a franchise-record 85 points from its bench in its previous game against Houston, had another solid effort from its reserves (52 points) on Monday led by De’Anthony Melton’s 23 points.

“Our depth was on full display tonight,” Jenkins said. “Those guys are hungry to go out there and make a difference.”

The Grizzlies may need to lean on their depth again vs. the Jazz as they could be without Grayson Allen, who injured his hip in Monday’s game. Allen’s X-rays came back negative, but Jenkins wasn’t sure if he’d be available for Wednesday’s game. Justise Winslow sat out Monday with a sore right thigh.

For Utah, Udoka Azubuike (sprained right ankle) and Juwan Morgan (left calf tightness) were out against the Cavaliers.

The Jazz’s arrival in Memphis was delayed after their charter plane, which departed from Salt Lake City, was forced to make an emergency landing in the same city shortly after takeoff on Tuesday when it hit a flock of birds that caused an engine issue. No players were injured, but the plane returned to Salt Lake City International Airport, where the Jazz waited for another aircraft.