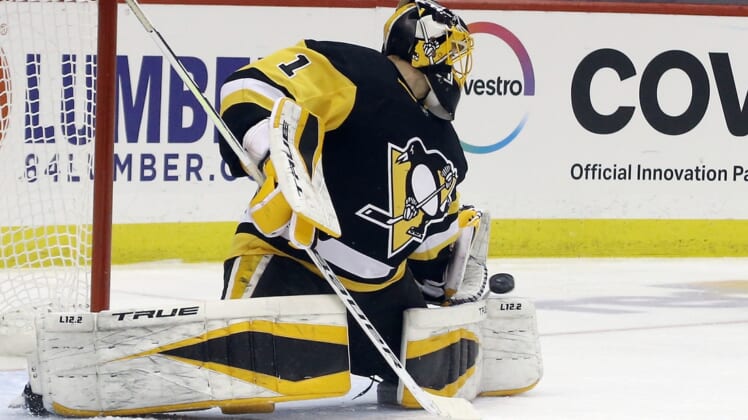 The Pittsburgh Penguins, coming off a homestand during which they earned nine of a possible 10 points, head into a two-game set against the Bruins in Boston starting Thursday night.

The set will kick off the Penguins’ longest trip of the season.

With their arena given over to the NCAA Frozen Four, the Penguins will be on the road for the next six games, hoping to continue to win despite missing several players.

Pittsburgh has been dealing with injury after injury all season, but now a goaltender is affected.

Goalie Tristan Jarry did not return to the ice or the bench Monday after the first period of a 2-1 win over the New York Islanders.

He is listed as day to day because of an upper-body injury, but it seems unlikely he will play Thursday after missing practice Wednesday.

The Penguins’ backup, Casey DeSmith, made 19 saves over the final two periods Monday to help ensure the win.

DeSmith, for numbers and salary-cap reasons, spent all of last season in the American Hockey League after serving in the backup role in the NHL in 2018-19.

Now that he’s back in that No. 2 role, he has the Penguins’ confidence.

“(DeSmith) battles,” Pittsburgh forward Jared McCann said. “That’s the best way to describe him. He’s a battler. Even in practice, you see him out there staying late. He’s always ready. He’s a guy that we trust a lot.”

Including Feb. 1, DeSmith has stopped 232 of the past 244 shots he has faced, a stretch of nine games.

“When there’s a big save to be made, he’s there for us,” McCann said.

Jarry is hardly the only Penguins player out because of injury. The two most prominent among the missing are second-line center Evgeni Malkin and his left winger, Kasperi Kapanen. Both have undisclosed injuries and have not resumed skating.

That hasn’t kept the Penguins from climbing into contention for the East Division title. They have used a strong mix of offense and defense to go 5-0-1 in their past six games.

Boston also is without its top goalie, but that’s not a recent development. Tuukka Rask has been out since March 7 with what is reported to be a back injury, save for making it through just one period last week against the Islanders.

Rask did not practice Wednesday but has a shot at returning Saturday against Pittsburgh. Jaroslav Halak and, to a lesser extent, Dan Vladar, have held down the fort.

“My guess would be closer to later in the week,” Bruins coach Bruce Cassidy said, but added: “We tried to speculate before on that when we didn’t think there was much going on, but it was obviously a more serious injury than we first anticipated. So there’s no use going down that road until he’s had a full practice and a certain amount of work. I suspect it will be (Vladar) and Halak for this week.”

Boston is 4-1-1 in its past six games after rallying from a two-goal deficit in the third period Tuesday and beating New Jersey 5-4 in a shootout, the Bruins’ highest offensive output since March 5.

“We were able to outscore our mistakes,” he said of Tuesday’s win. “I’m not sure (that) is going to work against Pittsburgh.”