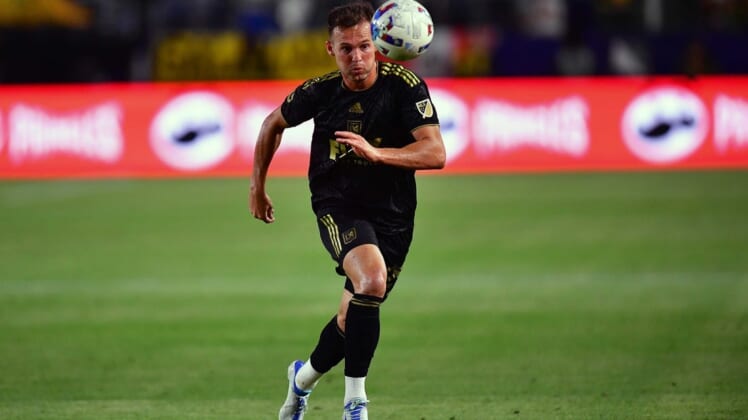 Los Angeles FC will put their four-game winning streak on the line Saturday evening in Sandy, Utah when they face off against host Real Salt Lake.

LAFC (15-4-3, 48 points) lead Major League Soccer in points and wins this season, are second in goal differential with a plus-21 margin and haven’t lost a game since July 2. Most recently, LAFC won at home a week ago, 2-1 over the visiting Seattle Sounders. Carlos Vela and Kwadwo Opoku provided goals for the winners.

For Vela, his goal ended a scoring drought. The former league MVP and Golden Boot winner hadn’t scored since May 21 before slotting home a goal against the Sounders in the 43rd minute.

Vela has seven goals and eight assists in 20 appearances this season. It’s a far cry from his 34-goal season in 2019, but he doesn’t have to carry the scoring load for LAFC as much anymore. The match against the Sounders marked the home debuts for international stars Gareth Bale and Giorgio Chiellini.

“He’s constantly working toward getting match minutes and getting his fitness back,” LAFC coach Steve Cherundolo said of Bale. “It’s Week 3 of the preseason for him. He’s going to get sharper, faster, better.”

Additionally, Opoku has five scores this season, and Cristian Arango leads the club with nine goals.

Real Salt Lake (9-7-7, 34 points) recently acquired some offensive reinforcements of their own — thanks to LAFC. The two clubs struck a deal earlier this week that sent forward Danny Musovski to RSL in exchange for allocation money.

Musovski, 26, wasn’t playing often for LAFC this season — scoring twice and adding an assist in 16 appearances (six starts) — but he tallied nine goals and four assists in 37 matches across the 2020 and 2021 seasons. He’s a proven scorer, and RSL hope he helps the club improve its plus-one goal differential.

“We are excited to add a dynamic striker in Danny who provides an additional goal-scoring threat on our roster and fits into our style of play,” RSL technical director Kurt Schmid said in a statement.

RSL had an inconsistent July campaign, finishing the month with just one victory and two draws in six matches.