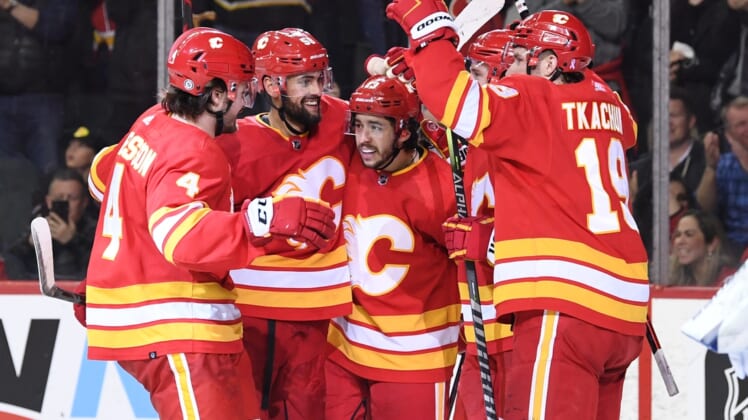 Johnny Gaudreau has six career hat tricks. The sight of people flipping their lids onto the ice never gets old for the Calgary Flames forward.

“It’s awesome. It’s a really cool feeling,” Gaudreau said after achieving the feat Thursday in a 4-1 win against the Tampa Bay Lightning. “It’s an even cooler feeling when you’ve got all the fans chanting your name. It’s pretty special. I don’t take those for granted. It was a cool moment there.”

He’ll have a good chance to keep the streak going at home on Saturday afternoon against the struggling Detroit Red Wings.

Gaudreau now has 26 goals and 77 points this season. The Flames have the same amount of points to lead the Pacific Division.

They bounced back from a 5-4 loss to the Washington Capitals on Tuesday and now are 15-2-1 over their past 18 games.

“It’s always fun to play the teams that are in the top, and Tampa is a team that has been at the top for a long time,” Flames goaltender Jacob Markstrom said. “But it still is two points — nothing more, nothing less.”

“He stood on his head, played really well,” Gaudreau said. “It’s a common thing now every game — he’s keeping us in games and helping us win games.

“Especially against a team like that, it’s hard to win games, and he’s been outstanding for us. And so has Vladdy (backup Dan Vladar), too. Both of them have been great for us all year and we wouldn’t be where we’re at today without those two guys.”

The Red Wings goaltenders have not played well lately, nor have their defensemen. Detroit has lost seven of its past nine games, allowing 51 goals during those defeats. The Red Wings will be looking to snap a four-game winless streak, including a 6-5 shootout loss to the Minnesota Wild on Thursday.

It was a better showing than their 9-2 home loss to the Arizona Coyotes two nights earlier but still not good enough.

“We’re just kind of in one of those spots right now where when we give up a chance, they’re finding a way in the net,” coach Jeff Blashill said. “That’s not on the goalie, that’s just the reality of it. Can we be better defensively? One hundred percent. But we’ve got to keep fighting here. We’ve got to keep grinding.”

Goaltender Alex Nedeljkovic handed the Wild a first-period goal when he mishandled the puck and it bounced through his legs and into the net.

“We all make mistakes. When a goalie makes mistakes, it’s very visible,” Blashill said. “But we made lots of mistakes (Thursday). The goalie also is the one that has to bail lots of guys out, so I think it was good mental toughness by him and I think it was a good job by our team sticking together.”

Markstrom made 33 saves when Calgary blanked Detroit 3-0 in the teams’ first meeting on Oct. 21. The Flames will be wrapping up a four-game homestand, while the Red Wings are beginning a four-game road trip.