Streaking Cavs get backcourt reunited, kick off roadie at Pistons 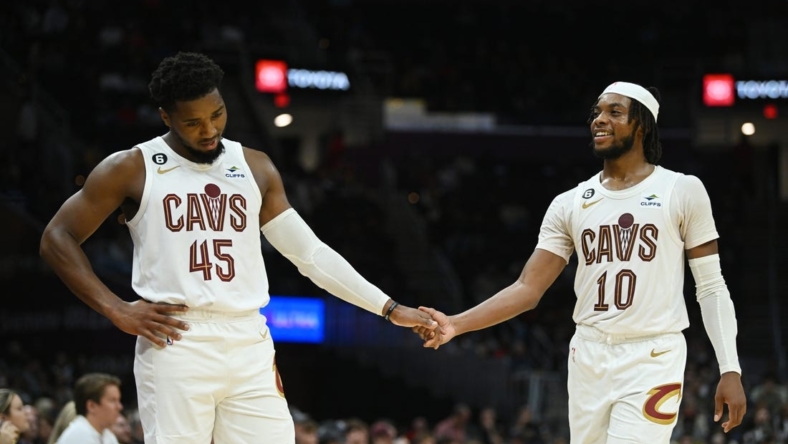 The Cleveland Cavaliers finally got a chance to see what their backcourt duo of Darius Garland and Donovan Mitchell could do for a full game. The results were very impressive.

They combined 54 points and 18 assists in a 114-113 overtime win over Boston, extending the team’s winning streak to six games. Cleveland will now embark on a five-game road trip, with a stop in Detroit to face the Pistons on Friday before heading to the West Coast.

Garland suffered an eye injury in the season opener and didn’t play again until Wednesday. He finished with 29 points and 12 assists in 42 minutes.

“He creates so much for our team, his shot-making, his playmaking as well,” forward Evan Mobley said. “On top of that, we have Donovan, so we have a very strong backcourt.”

Garland was thrilled just to get back in action after recovering from an injury that he thought would require surgery.

“We were winning and I was happy about that, but I wanted to be on the floor with them and feel that energy,” Garland said. “I’m happy to be back now.”

Acquired in a blockbuster trade with Utah, Mitchell is averaging 31.1 points and 7.1 assists.

“There’s a lot of different things you can do with them,” Cavaliers coach J.B. Bickerstaff said. “They’re both so dynamic. They both can create off the dribble, they both can catch and shoot, come off screens and shoot and they’re both phenomenal passers. They can make their teammates better. You go 18 assists between the two of them and only one turnover, that’s what you want from your guards.”

Cleveland still had to sweat out 53 minutes to collect its latest win. Boston’s Jaylen Brown missed a potential game-winning jumper in the closing seconds of overtime.

The Pistons have lost seven of their last eight games. They won their last home game against Golden State, then fell to Milwaukee twice in three nights.

Detroit gave the unbeaten Bucks a tough challenge on Monday, losing 110-108. The rematch was a much different story, as the Pistons trailed by double digits virtually the entire second half in a 116-91 defeat.

The Bucks scored 24 second-chance points with a majority coming in the first half.

Franchise player Cade Cunningham was limited to 10 points and four assists. He had averaged 27.8 points, 8.3 rebounds and 7.5 assists the previous four games, including a 27-point, six-rebound, seven-assist performance on Monday.

Cunningham had great success coming off screens for mid-range jumpers around the elbow during his hot streak. The Bucks made it more difficult for him to find his sweet spot.

“(Jrue) Holiday and (Jevon) Carter are probably two of the pit bulls of the league as far as pick-and-roll defense,” Casey said. “Then they brought the bigs up just a little bit higher to kind of box him in, a kind of semi-blitz. The same shots he had the other night, they were really doing a good job of coming from behind and challenging him.”

Empire Sports Media - TJ Dillashaw has retired from the UFC