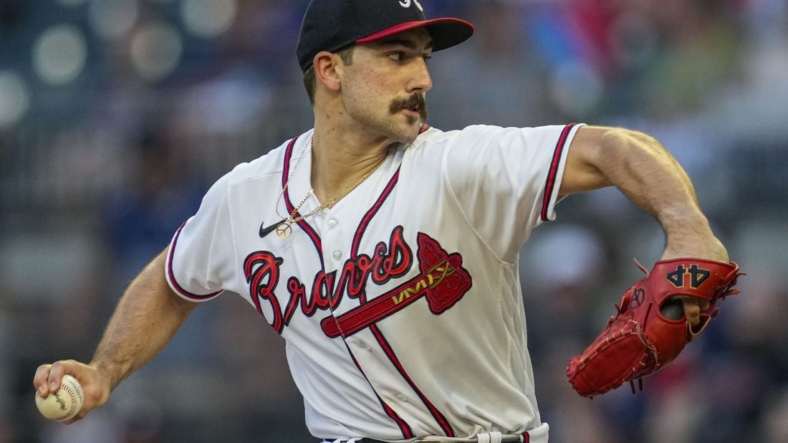 The Atlanta Braves hope they don’t have to show off their deep bullpen quite as much Wednesday afternoon when they go for a two-game road sweep of the Oakland Athletics.

On a night billed as Matt Olson’s homecoming, another former member of the A’s was equally responsible for a 10-9 Braves win that began as a slugfest but ended as a battle of relievers.

Jesse Chavez, who recorded 17 wins in four seasons as a starter and reliever for the A’s from 2012-15, chalked up career victory No. 47 by getting four outs at a key turning point of the series opener.

Chavez was summoned in the fifth inning after Braves starter Kyle Wright was ambushed for eight runs on five hits in four-plus innings and reliever Dylan Lee gave up Chad Pinder’s three-run, pinch-hit shot that got Oakland even at 9-9. The A’s had trailed by as many as five runs earlier.

Shea Langeliers and Cody Thomas threatened to give the A’s their first lead of the game when they stroked two-out hits off Lee following Pinder’s homer. However, Chavez came out of the bullpen to strike out Nick Allen, retaining the tie and setting the stage for Austin Riley’s difference-making sacrifice fly in the sixth.

Chavez then went through the top of the Oakland order in the sixth, setting a high bar for his fellow relievers.

Raisel Iglesias, A.J. Minter and Kenley Jansen met the challenge, each throwing a scoreless inning with two strikeouts, enabling the Braves to record a sixth straight win and move into a tie with the New York Mets atop the National League East.

“There’s a lot of positives to take away from that,” he said, adding of his players, “They continue to show their grind, their grit.”

The A’s will be celebrating a homecoming of their own in the rematch when left-hander Ken Waldichuk (0-0, 1.93 ERA) takes the mound on Wednesday.

The 24-year-old product of nearby Saint Mary’s College, acquired Aug. 1 in the Frankie Montas deal with the New York Yankees, will be pitching at home for the first time after making his major league debut at Washington on Thursday.

Waldichuk held his own against the Nationals, overcoming five hits and four walks to allow just one run in 4 2/3 innings in an eventual 7-5 loss.

He will see a Braves team that hasn’t lost since moving Ronald Acuna Jr. to designated hitter last week. That’s not about to change, Atlanta manager Brian Snitker insisted, especially after Acuna contributed a single, a double and two runs to the Tuesday win.

“If we play him in the outfield, it’s probably going to get sore again,” Snitker said of Acuna’s right knee. “If we can DH him and keep him active, that’s what we’re going to have to do.”

The man tasked with giving the Braves bullpen a rest is Spencer Strider (9-4, 2.67 ERA), who is coming off one of the season’s best pitching performances. On Thursday against the Colorado Rockies, the 23-year-old right-hander struck out 16 and allowed just two hits and no walks in eight innings during a 3-0 home win.

Strider not only has never faced the A’s, but he has never gone head-to-head in the majors against any current member of the team.