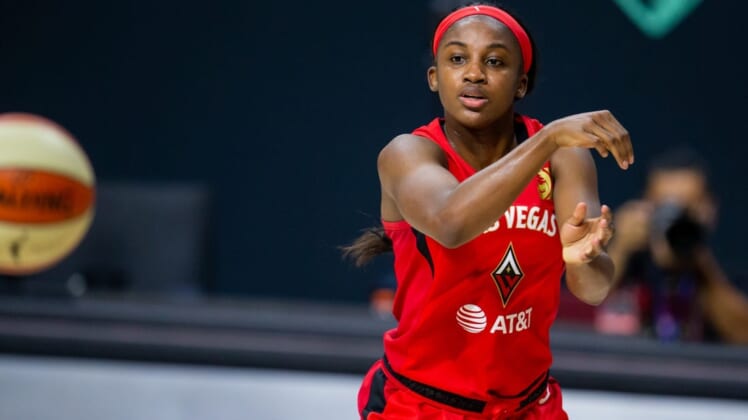 The Las Vegas Aces look to complete a perfect four-game homestand on Monday when they host the slumping Los Angeles Sparks in a Commissioner’s Cup matchup.

Las Vegas (6-1) won its fourth straight on Saturday, hitting triple-digits for the second time this season in a 100-80 rout of Phoenix. The Aces scored a franchise-record 38 points in the third quarter to blow the game open.

Kelsey Plum scored 15 in the third quarter and finished with a game-high 24 points and five rebounds.

The offensive eruption was typical of the Aces’ league-leading 91.7 scoring average. However, increased defensive intensity proved central to Saturday’s blowout.

Las Vegas held the Mercury to 35 points combined in the middle periods.

“I’ve been preaching the whole time, when we can play out of our defense, we become very dangerous,” Aces coach Becky Hammon said.

Los Angeles (2-4) meanwhile has struggled to score consistently during its four-game losing streak.

The Sparks scored 185 combined points in their first two outings of the season, but are averaging just 74.8 points through the last four. In Friday’s 83-80 loss at Seattle, the Sparks shot just 3 of 14 from 3-point range.

The last of those misses came on Nneka Ogwumike’s would-be, game-tying attempt at the buzzer. The loss marked L.A.’s third by a single-possession margin amid the ongoing skid.

The Sparks rallied from down as many as 18 points in the first half against the Storm.

“I hope that our group was able to find that thing tonight that allows us to start games that way, as opposed to waiting until there’s no other choice,” Sparks coach Derek Fisher said.

Cambage will be facing her former team for the first time this season. She averaged 14.2 points and 8.2 rebounds and made the All-Star team as a member of the Aces last year.