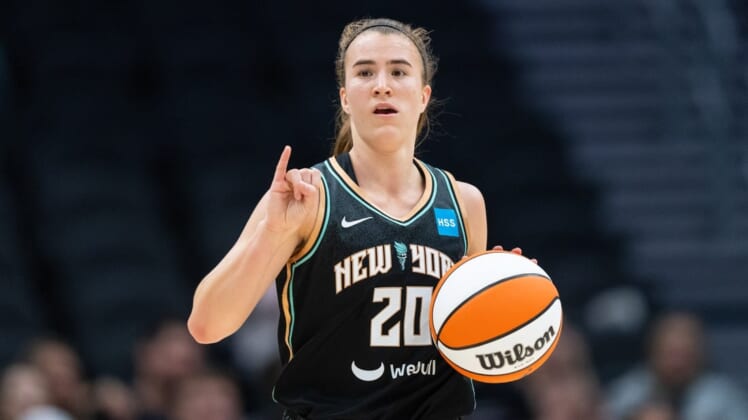 Gabby Williams scored a season-high 23 points as the Seattle Storm edged the New York Liberty 81-72 on Sunday afternoon in the finale of a five-game road trip.

Seattle (10-6) finished the trip with four wins and made enough plays down the stretch Sunday to give Sue Bird a win in what likely was her final appearance as a player in her native New York.

Williams shot 10 of 15 from the field and finished three shy of her career-high for points while grabbing nine rebounds She helped Seattle hold off New York by hitting a shot inside as well as a 3-pointer in the final 2:14 as the Storm ended the game on an 8-0 run.

Breanna Stewart added 18 points and nine rebounds as Seattle shot 42.7 percent and beat the Liberty for the third time this season.

Bird, who announced her retirement on Thursday, chipped in 11 points and exited to a standing ovation from the crowd after hitting a 3-pointer from the top of the key with 20.6 seconds remaining.

Seattle opened a 28-19 lead on Stewart’s fadeaway jumper with 7:43 remaining in the first half but New York countered with a 17-6 spurt and took its first lead on a layup by Johannes at 2:19 before the break. Seattle took a 39-37 lead by halftime.

The Liberty tied the game twice and then took a 61-59 lead on a layup by Han Xu with 7:43 left, but Seattle never trailed after Stewart converted a 3-point play with 5:36 to go.