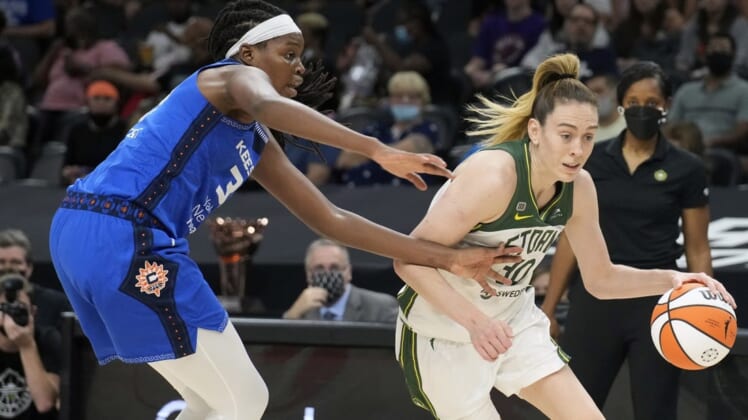 The Seattle Storm are improving after surviving a couple of close calls.

They’ll try to win their third game in a row when they host the struggling New York Liberty on Friday night.

The Storm (3-3) escaped when opponents’ last-second 3-pointers that could have forced overtime missed in both a 74-71 victory against Chicago on May 18 and an 83-80 victory against Los Angeles in their most recent game last Friday.

“We’ll take it,” said Seattle coach Noelle Quinn, whose team had lost three straight before the back-to-back wins. “Once again ending our game with a defensive possession showed a lot of grit. We weathered the storm in the second half. The offense slowed up a little bit, but again our defense sustained us. Amazing effort on that end of the floor from everybody.”

The Storm’s offense has yet to catch up with their defense, though it has shown some improvement after averaging just 71.7 points during the losing streak.

“I don’t think we’re struggling,” guard Sue Bird said after Seattle nearly squandered an 18-point lead against Los Angeles. “We just lost a little bit of our aggressiveness as they were making that comeback.”

The Liberty (1-5) are on a five-game losing slide after an 84-78 loss at Minnesota on Tuesday.

New York held an eight-point lead early in the fourth quarter, but let it slip away as the Lynx made 13 of 16 free throws in the final eight minutes, finishing 27 of 33 at the line. The Liberty made 13 of 18 free throws for the game.

“It all came down to the free-throw line,” coach Sandy Brondello said. “We have to have foul discipline.”

Brondello has said that everyone on the team must find ways to be better, “myself included.”