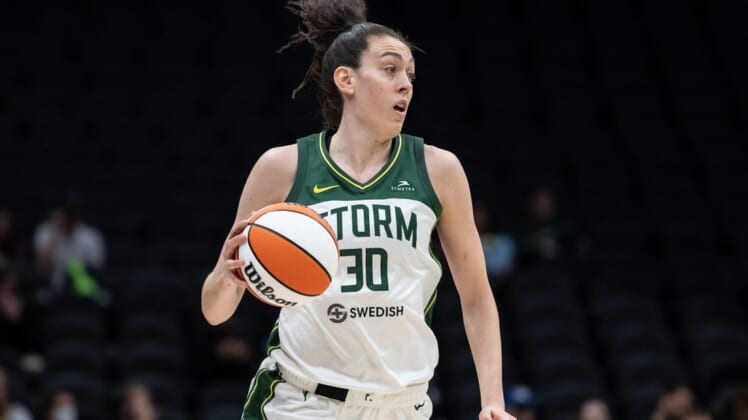 Tina Charles had 16 points and nine rebounds for the Storm (19-11), who have advanced to the playoffs for the seventh-consecutive season, winning WNBA titles in 2018 and 2020 during that run. It is also Seattle’s 18th playoff berth in 23 seasons.

It was the first of two-consecutive games between the teams, with the rematch set for Sunday at Washington.

A 3-pointer from Washington’s Alysha Clark with 26.3 seconds remaining cut the Storm’s lead to a single point at 78-77. Seattle sealed the victory on four free throws from Stewart over the final 11.8 seconds.

Stewart, the league’s leading scorer at 21.0 points per game, was just 4 of 11 from the field but did go 9 of 10 from the free-throw line. Seattle’s Sue Bird, who is now guaranteed to go to the playoffs in her final season, had four points and seven assists in 29 minutes.

Seattle shot 42.6 percent from the field while the Mystics shot 41.8 percent.

Washington jumped out to a 28-19 lead with 7:50 to go in the first half, but the Storm finished the second quarter on a 16-7 run to even the score at the midway point.

Washington had eight blocks, including three from Delle Donne and Myisha Hines-Allen, but the Mystics still saw their three-game winning streak come to an end.