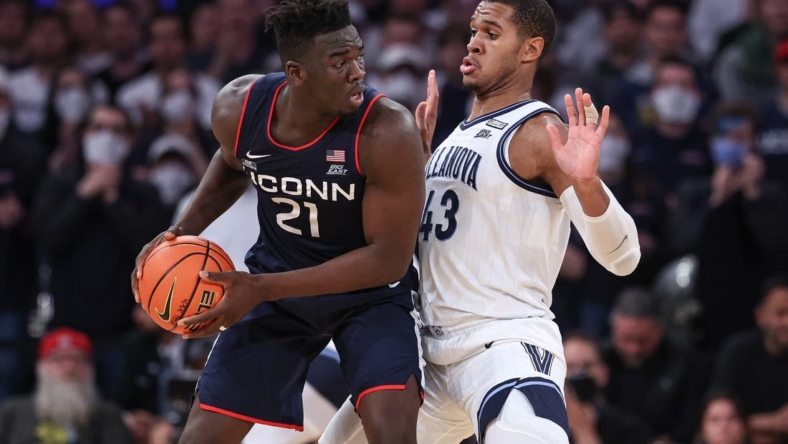 UConn coach Danny Hurley said he wanted a more challenging nonconference schedule for his team this season, but it’s unlikely the Huskies will receive much of a test when they open the campaign against visiting Stonehill on Monday night in Hartford, Conn.

Stonehill made the move to Division I this offseason, joining the Northeast Conference. The Skyhawks return three starters from a team that finished with a 15-12 record in Division II a year ago and were picked to finish ninth (last) in the NEC preseason poll.

“We’re bracing for a better Big East than what we’ve seen these last two years,” Hurley told the Hartford Courant. “I think the league as a whole is going to be better than it has been, and you calculate that into what you’re doing with your nonconference schedule.”

UConn’s nonconference schedule also includes a matchup with Oregon in the Phil Knight Invitational plus games against Oklahoma State and Florida.

UConn will build around 6-foot-9 junior forward Adama Sanogo, who was chosen as the Big East Preseason Player of the Year. Sanogo averaged 14.8 points and 8.8 rebounds per game last season, when he blocked 55 shots.

The Huskies, who were picked fourth in the Big East preseason coaches’ poll, will start the season without captain Andre Jackson Jr., a combo guard who broke a finger in practice Oct. 12. Jackson was expected to take on an increased role this season since UConn has questions at point guard.

“It changes a lot,” Hurley said at Big East media day. “You don’t want to lose any rotation player, but he’s one of our best players.”

Chris Kraus is in his 10th season as Stonehill’s coach. He guided the Skyhawks to the NCAA Division II tournament three times, including a trip to the Elite Eight in 2015-16.

“Offensively, how we’re going to play and our style and system … it’s not going to be any different than what we’ve done in the Northeast-10,” Kraus said. “We’ve had a lot of success and we’re going to try to bring that now to the NEC and the Division I level, but playing against UConn with their length and athleticism and some potential NBA draft picks, our team play and team ball movement needs to be even better.”