Still eyeing playoff spot, the Los Angeles Kings get by the Anaheim Ducks 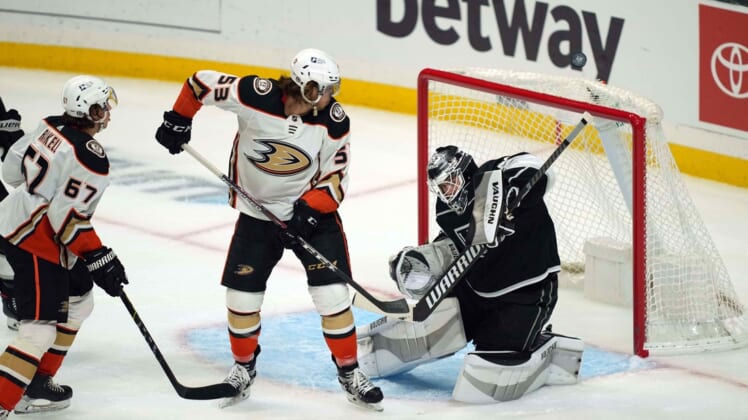 Blake Lizotte and Andreas Athanasiou each had a goal and two assists for the Los Angeles Kings in a 4-1 win against the visiting Anaheim Ducks on Tuesday night.

Carl Grundstrom had a goal and an assist, Anze Kopitar also scored, and Calvin Petersen made 24 saves for the Kings (17-20-6), who pulled within five points of the Arizona Coyotes for fourth place in the West Division.

Los Angeles has 13 games remaining, three more than the Coyotes, whom they’re scheduled to play three times down the stretch.

Cam Fowler scored for Anaheim with 5:24 left in the third period to prevent Petersen’s second NHL shutout. Anthony Stolarz made 18 saves for the Ducks (14-26-7), who were looking for their fourth straight win on the road.

The Kings, playing in front of spectators at Staples Center for the first time this season, took a 1-0 lead at 5:26 of the first period on a quirky goal.

Athanasiou took a shot from the left point that hit Grundstrom in the back as he drove to the net. Stolarz lost sight of the puck as it fell in the crease to his left before bouncing across the goal line.

Drew Doughty made a stretch pass to Kopitar to spring a breakaway and Kopitar beat Stolarz low on his glove side for his 10th goal of the season.

Athanasiou also scored his 10th goal of the season to give the Kings a 3-0 lead at 10:48 of the second period.

Lizotte’s long lateral pass through the slot made it to Athanasiou, who fired a one-timer into the net before Stolarz could slide over.

Petersen made his best save of the game at 7:53 of the third period, when he stuck out his left skate and made a toe save on a redirection by Danton Heinen.

Lizotte then made it 4-0 when he put in a rebound at 10:50 for the first three-point game of his NHL career.