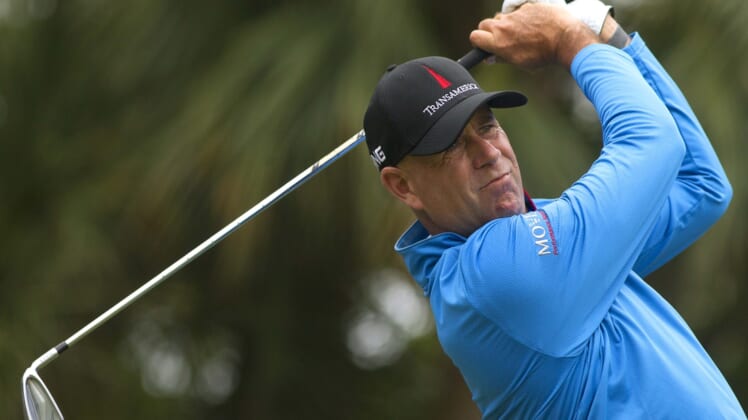 Two-time former champion Stewart Cink carded his second consecutive 8-under 63 at Harbour Town Golf Links on Friday to take a commanding five-shot lead into the weekend at the RBC Heritage in Hilton Head, S.C.

Cink posted a bogey-free second round that kicked off with a flourish on the second hole when he made eagle on the par-5 second hole and followed up with birdies on Nos. 3 and 6. He carded four more birdies on the back to finish at 16-under 126 and five strokes ahead of Canadian Corey Conners, who shot 64 on Friday and stands 11 under.

His second straight 63 is Cink’s best-ever score at Harbour Town following 74 previous professional rounds (22 tournament starts) on the track. The 47-year-old has won the event in 2000 and 2004.

Cink, a 25-year PGA veteran and seven-time Tour winner, came in confident after finishing tied for 12th at last week’s Masters and a top-20 finish in his previous event, The Honda Classic.

“I try to control what I can control,” said Cink, who is making his 22nd start at the event and has his son on the bag. “When you shoot a really low round, a lot of times the things that lead to that, you can’t control all that and you just, you allow those things to happen.

“And so the things I can control, I did a good job of today, just like I did yesterday, and it just so happened that I holed a couple of key putts and got up and down a few times — made an eagle on No. 2 — and you know, the round just added up to some really good stuff and a really good score again today.

“I didn’t really have any anticipation about shooting a certain number or anything, I just wanted to come out here and continue to be disciplined and stay in the moment, in the present, and working our plan.”

Argentina’s Emiliano Grillo matched Connors’ 64 on Friday, posting a bogey-free round that featured five birdies on the front and a birdie-birdie finish, and stands in third place at 10 under.

First-round leader Cameron Smith, who recorded a career low with a 62 on Thursday, failed to get any momentum going and balanced three bogeys with three birdies to finish with an even-par 71 to stay at 9 under. He’s tied for fourth place with Collin Morikawa (68), South Korea’s Sungjae Im (65) and Billy Horschel (67).

“Wasn’t actually too bad out there,” said 27-year-old Smith, who holed a 3-footer for birdie on his final hole of the day. “I think the golfing gods got a few back on me today. They let everything in yesterday, and today I thought I was putting really good and just had a lot of putts that went over the edge, didn’t go in.

“So, everything is looking good. Looking forward to tomorrow.”

The cut was 2 under and sent several notables packing before the weekend including 2015 champion Jim Furyk, Englishmen Paul Casey and Tommy Fleetwood and Spaniard Sergio Garcia.