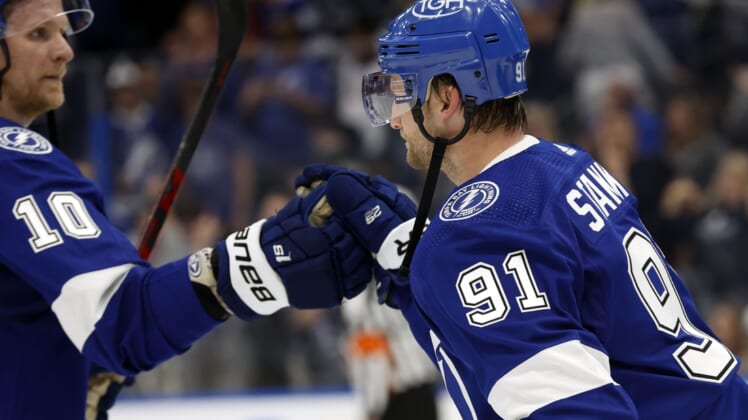 Steven Stamkos had a goal and two assists to break the Lightning’s record for career points in Tampa Bay’s 8-1 victory over the visiting Toronto Maple Leafs on Thursday night.

Stamkos scored his 34th goal of the season on a second-period power play to record his 954th point, passing Martin St. Louis as the franchise’s all-time leader. Stamkos added two assists in the third period.

Pat Maroon scored once and Corey Perry and Victor Hedman logged two assists apiece to help the Lightning win for the third time in four games.

Andrei Vasilevskiy stopped 35 shots for the Lightning in a game that became chippy as the score mounted.

The Lightning scored four goals in the second period and four more in the third.

Killorn deflected Erik Cernak’s shot to open the scoring at 3:54 of the middle period, and Nicholas Paul’s forechecking set up Colton’s goal at 11:37.

Stamkos scored his record-setting goal on a one-timer from the left circle at 12:38. With Toronto’s Jason Spezza off for hooking, Kucherov earned his 600th career point with the pass that set up Stamkos.

Palat scored at 1:12 of the third period on a deflection of Mikhail Sergachev’s shot.

Killorn collected his 25th goal of the season on a redirect at 4:33 of the third on a power play for a 5-0 edge.

Mikheyev replied for the Maple Leafs on a power play at 7:45 of the third.

Toronto’s Kyle Clifford received a match penalty for high-sticking at 8:10 of the third.

Colton scored on the ensuing power play at 8:50. Maroon completed the scoring at 14:11 on another power play as the Lightning finished the night 5-for-6 with the man advantage.

Brayden Point (lower-body injury) did not play for Tampa Bay.