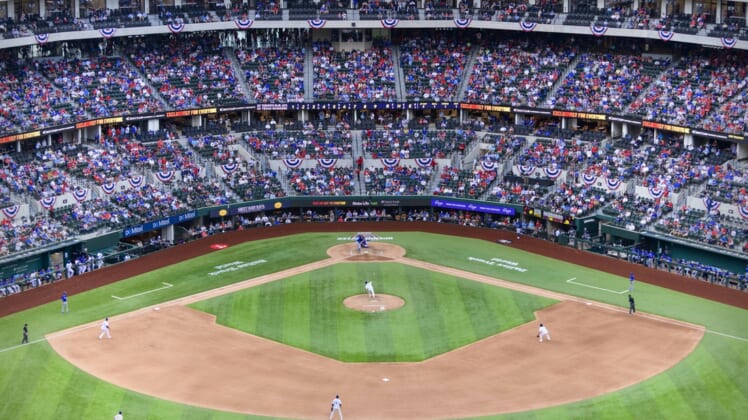 Apr 5, 2021; Arlington, Texas, USA; A view of the field and the stands and the fans during the game between the Texas Rangers and the Toronto Blue Jays at Globe Life Field. Mandatory Credit: Jerome Miron-USA TODAY Sports

Matz (1-0) allowed one run, two hits and one walk and hit a batter in 6 1/3 innings to help spoil the Rangers’ home opener before a crowd of 38,238 with COVID-19 pandemic attendance restrictions lifted.

The Blue Jays scored once in the first. Biggio walked, took second on Bo Bichette’s single and scored on Vladimir Guerrero Jr.’s single.

They added three runs in the second. Randal Grichuk led off with a walk, Semien hit his second homer of the season and Biggio followed with his first homer.

Matz, making his Blue Jays debut, retired his first nine batters with four strikeouts before Isiah Kiner-Falefa led off the fourth with a single. He hit Joey Gallo with a pitch with one out and Nate Lowe delivered a two-out RBI single.

Kyle Cody replaced Foltynewicz in the fifth and pitched around a leadoff single. The right-hander hit Guerrero and Rowdy Tellez with consecutive pitches with one out in the sixth. Grichuk followed with an RBI single.

Cody walked Biggio with one out in the seventh, hit Bo Bichette with a pitch and allowed an RBI single to Teoscar Hernandez. Brett de Geus took over and ended the inning with a double-play grounder.

Matz struck out his only batter of the seventh before being replaced by Tyler Chatwood, who allowed a single before inducing a double-play grounder.

Tim Mayza replaced Chatwood after Kiner-Falefa’s two-out single in the eighth and pitched around an error.

Rafael Dolis hit Nick Solak with a pitch to start the bottom of the ninth and allowed Brock Holt’s two-out RBI double.

Blue Jays catcher Danny Jansen was hit on the inside of the knee with a foul ball in the sixth inning. He finished the inning before Alejandro Kirk replaced him in the seventh.