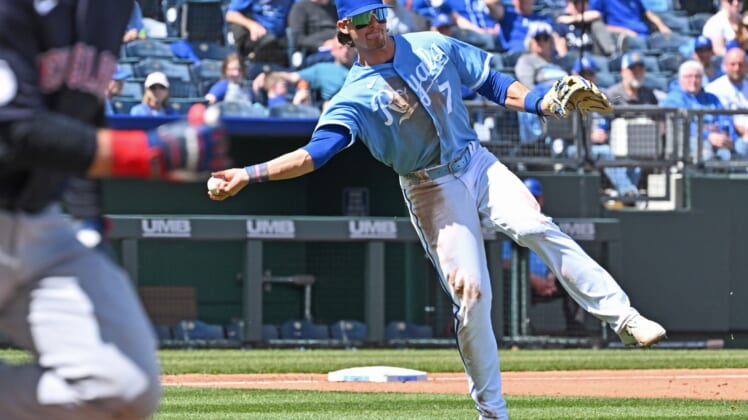 Steven Kwan established a major-league record Monday by reaching base safely for the 15th time over his first four games, including a bases-clearing triple in the eighth inning, as the Cleveland Guardians defeated the host Kansas City Royals 10-7.

Kwan owned the record with two walks earlier Monday before his triple broke open the game.

Again, Cleveland loaded the bases with no outs, but Carlos Hernandez induced a 6-4-3 double play, which scored one run. Following an infield hit by Amed Rosario that scored a second run, Hernandez got the final out.

The Royals loaded the bases with one out in the first, but Aaron Civale got Carlos Santana and Hunter Dozier to end the threat.

The Royals scored a run in the third on an RBI single by Salvador Perez, his first hit and RBI of the season.

The Guardians came back with a two-run fourth. Owen Miller doubled off the glove of Whit Merrifield in right, followed by a home run by Oscar Mercado into the bullpen in left.

The Royals tied it in the bottom of the fourth. Adalberto Mondesi led off with a single, and Michael A. Taylor followed with a walk. Nicky Lopez tried a sacrifice bunt, but Jose Ramirez’s throw eluded second baseman Andres Gimenez, allowing Mondesi to score and putting runners on second and third with no outs. Merrifield’s groundout scored Taylor and ended Civale’s day.

The Guardians took a 6-4 lead in the seventh on a pair of bloop hits by Ramirez and Franmil Reyes.

The Royals loaded the bases with no outs in the seventh, but they scored only one run before the Guardians blew the game open in the eighth.

Benintendi hit a two-run homer in the ninth for Kansas City to complete the scoring.