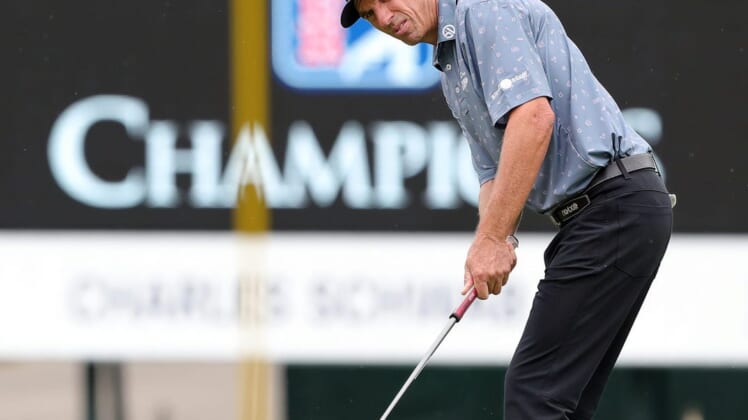 Steven Alker of New Zealand, the current Charles Schwab Cup money leader, enjoyed a bogey-free Friday as his 4-under-par 66 pulled him into a four-way tie for the lead halfway through the 72-hole Bridgestone Senior Players Championship in Akron, Ohio.

Alker, who turns 51 later this month, used a three-birdie stretch on holes No. 14 through 16 to bolster his steady second round and keep the Champions Tour rookie in contention for his fourth win this season — and his second major.

Alker’s 134 score after 36 holes is matched by three others — Joe Durant, who fired a 65 Friday, Tim Petrovic (66) and first-round leader Alex Cejka of Germany, who carded a 70 a day after scoring a blistering 64 to start the tournament.

“First of all, it’s nice to have a bogey-free round at Firestone,” said Alker, who also won the Senior PGA Championship in May. “It’s that type of golf course, you’ve just got to keep going. But kind of everything (was working), drove it in the fairway for the most part today and hit a lot of greens except for the last few. I scrambled nicely the last couple holes.”

Starting on the back nine, Alker made his move quickly with his trio of birdies, capped by sinking his putt on the par-5 16th. On the front, he birdied the other par-5 on the course at No. 2 and cruised with seven straight pars to end his day.

“A few more putts would be nice, but yeah, at Firestone, just fairways and greens around here,” Alker said.

Durant, 58, charged to a first-place tie with a blistering 5-under on the back nine after just two birdies and two bogeys on the front. That included birdies on three of his last four holes at Nos. 15, 16 and 18. Shooting for his fifth career Champions Tour win, his 30 on the back nine was best in the round among the field.

Petrovic, 55, is searching for his first career win on the tour after 10 second-place finished, including four in majors. He recorded seven birdies, including four straight on the 5th through 8th holes, and three bogeys in an eventful day.

Thursday’s leader Cejka, whose only two wins on tour were majors in 2021 as a rookie (the Regions Tradition and the Senior PGA Championship), was quiet with just one birdie and one bogey in being caught atop the leaderboard.

The defending champion Stricker went without a bogey, saving par on his final hole at No. 18 to do so.

“Yeah, that was big. I hate to make a bogey, the only bogey of the day on the last hole, so I was grinding to make sure I get that one in there,” he said. “I didn’t want to make a bogey today, so it was a good way to finish, good save.”

Three others are slotted next at 3 under at the midway point — Davis Love III (66), Rocco Mediate (69) and Australian Rod Pampling, who fired the low round of the day with a 64.

John Daly retired midway through the second round after a 4-over 39 on the front nine, following a 73 on Thursday.