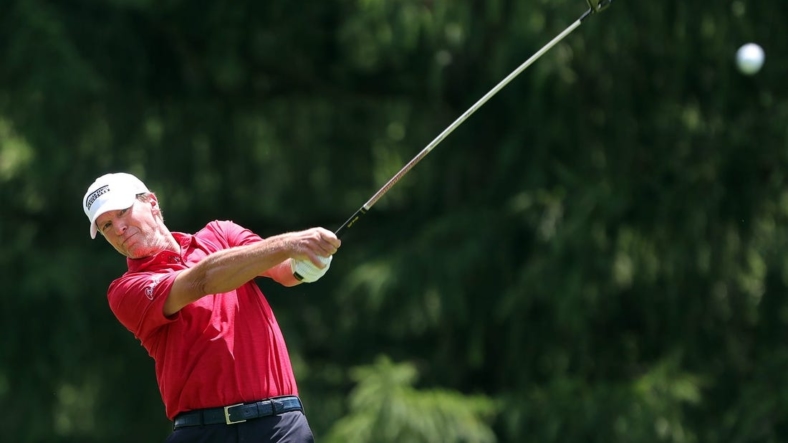 Steve Stricker rang up four straight birdies on the back nine to beat out Brett Quigley and win the Ally Challenge on Sunday in Grand Blanc, Mich.

Stricker’s final-round, 5-under-par 67 got him to 15-under 201 for the week, one shot better than Quigley, who made a late surge with an eagle-birdie-birdie finish. It is Stricker’s ninth PGA Tour Champions win and his second this season.

Stricker’s birdie run began on the par-5 13th at Warwick Hills Golf and Country Club, one hole after making what he called a “silly” bogey.

“Then I just told (wife and caddie Nicki Stricker), I said, we’re still in this,” Stricker said. “We just keep our head down and keep plugging. Next thing you know, I rattled off four birdies. That was the whole difference in the tournament right there.”

The last birdie, which got him to 15 under, was a short right-to-left putt at the par-5 16th that rolled around the cup as it dropped.

“You know what, just having a good attitude today,” Stricker said. “When things like I felt weren’t going right, that I just kept plugging along and things turned around and I did some good things coming in.”

Quigley was even through 15 holes but sank an eagle putt at the 16th, then birdied the par-3 17th and par-4 18th to polish off a 68. He had to stick around to see if Stricker might drop into a playoff with him.

“I felt like I had done a lot of things well today and just not gotten much out of it and just trying to stay in there,” Quigley said. “Fortunately, got a good bounce on the second shot on 16 and made the putt, and then 17 and then 18, all of a sudden it was (from) absolutely nowhere to watching Steve finish on 18.”

But Stricker parred his last two holes to hold on.

“That’s the way it is out here, you’re always in it. You can rattle off some birdies,” Stricker said.

Jeff Maggert had the low round of the day, a 7-under 65, to place third at 13 under. He made six birdies on the back nine to finish in 30.

Second-round leader Scott Dunlap struggled to a 71 and tied for fourth at 12 under with Ireland’s Padraig Harrington (70).