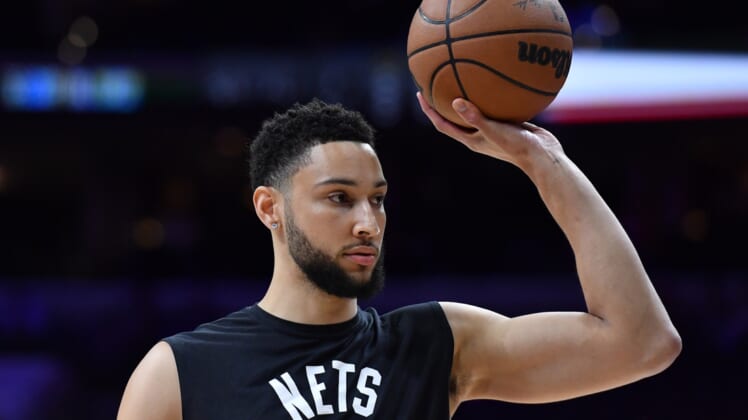 Ben Simmons hasn’t seen game action since June 20, when the Atlanta Hawks defeated the Philadelphia 76ers in Game 7 of the Eastern Conference semifinals.

Since traded to Brooklyn, Simmons has yet to make his debut in a Nets uniform, but coach Steve Nash said Tuesday he is “extremely hopeful” the All-Star guard will play before the regular season ends.

Simmons sat out the season in Philadelphia, waiting for the 76ers to trade him. Now, he’s coping with a back injury.

The Nets acquired Simmons at the trade deadline on Feb. 10 along with Seth Curry, Andre Drummond and two first-round picks, with James Harden and Paul Millsap joining the 76ers. The expectation was that he would have made his debut by now, but the back issue has limited Simmons in the past few weeks.

“The biggest thing we’ve tried to do is to have him be involved in everything,” Nash said. “The traveling is the one caveat where sometimes you’re weighing the cost-benefit of him on airplanes and buses and different beds. When he’s with us we want him in every meeting, in every walkthrough, in every film session, whatever it may be so he’s around the group. We’d love for him to travel, be with the team all the time, but we have to weigh that scenario as well.”

Simmons is not in Orlando, where the Nets will face the Magic on Tuesday night.

The Nets can use him over their final 14 games. At 35-33, they are in eighth place in the Eastern Conference and pegged for the play-in tournament if the season ended now. They are four games behind the Cleveland Cavaliers for the final guaranteed playoff spot.

Guard Goran Dragic said his teammates will welcome having Simmons on the court.

“Because then you get another weapon, another defender, another rebounder, so it’s going to be even better,” Dragic said. “Of course we wish him all the best and he can come back quick and help us.”