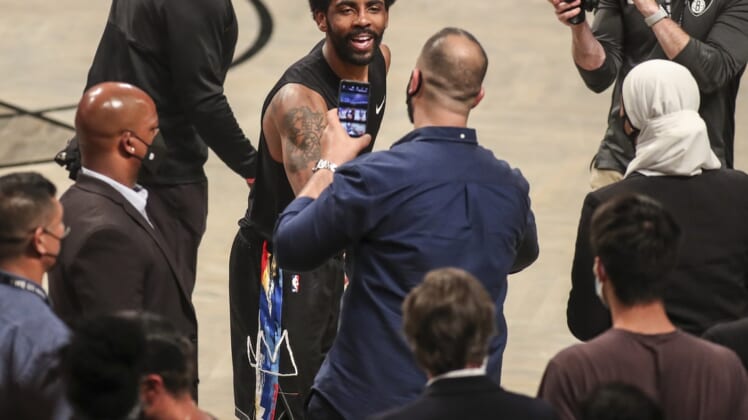 A day after the Brooklyn Nets determined star point guard Kyrie Irving will not participate in team activities until he is vaccinated against COVID-19, head coach Steve Nash called the decision “difficult.”

“Everyone had their say,” Nash told reporters after the Nets’ practice on Wednesday. “It takes time to make decisions like that. This is a difficult decision. But I think it was a sound one and one that makes complete sense to everyone.”

Nash addressed the team Wednesday. Star guard James Harden said it’s time to proceed without Irving, but both said they would happily welcome him back.

“We are just going to move on, and if things change, it would be incredible to have him back in the fold,” Nash said. “It was a tenuous situation to have a player in and out like that. There’s more clarity, and we can focus on the future and get going.”

Irving, 29, has been staunch against getting vaccinated, despite a New York City order requiring the shot if he is to play or practice with the team at home this season.

“Given the evolving nature of the situation and after thorough deliberation, we have decided Kyrie Irving will not play or practice with the team until he is eligible to be a full participant,” Nets general manager Sean Marks said in a statement Tuesday. “Kyrie has made a personal choice, and we respect his individual right to choose. Currently the choice restricts his ability to be a full-time member of the team, and we will not permit any member of our team to participate with part-time availability.”

Harden said he and star forward Kevin Durant talked with the personnel involved in the Irving decision and that all parties see eye-to-eye.

“Sean [Marks], Steve [Nash], me, KD, Kyrie, we all had conversations,” Harden said. “Kyrie believes in his beliefs, and he stands firm and strong on that. And for us, we respect it. We all love Ky. But as far as us, we have a job to do.

“Individually, myself, I am still wanting to set myself up for a championship. And I feel like the entire organization is on the same path and we are all in this as a collective unit.”

The Nets, who lost to the eventual NBA champion Milwaukee Bucks in the Eastern Conference semifinals last season, are scheduled to open the regular season at Milwaukee on Tuesday night.

The New York COVID mandate prohibits unvaccinated individuals from working in or attending events at many indoor spaces, including entertainment and sporting venues. Similar rules are in place in San Francisco and will go into effect in Los Angeles as of Nov. 29.

Irving’s stance potentially could cost him millions, although the players’ association could move to challenge salary withholdings over vaccination status.

Marks said Tuesday that Irving would not be paid for home games he misses while “ineligible.” The NBA isn’t forcing players to get vaccinated against COVID-19, but it is going to withhold pay for any player who misses games due to local regulations.

Marks said the team’s decision is not indicative of an impending trade.

Irving, a seven-time All-Star, played in 54 regular-season games for the Nets last season and averaged 26.9 points, 6.0 assists and 4.8 rebounds.