Steve Kerr playing it calm, but the Warriors have been exposed 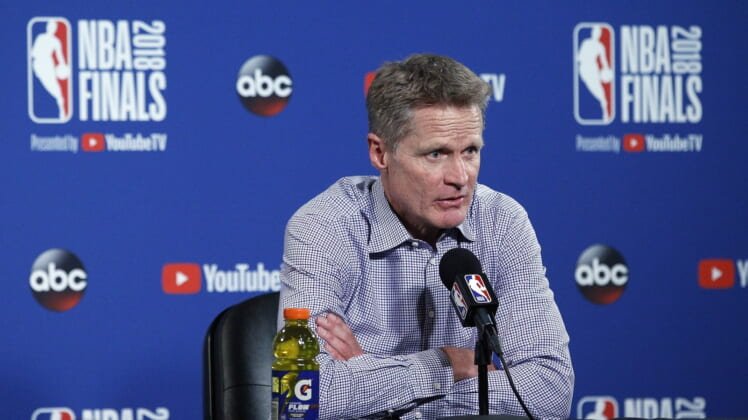 Head coach Steve Kerr and the Golden State Warriors are not having their typically dominant season. This came out in droves during an humiliating 127-101 home loss to the Los Angeles Lakers on Christmas.

Even with LeBron James sitting out the fourth quarter, Los Angeles took it to the two-time defending champs in a big way. The loss moved Golden State to a pedestrian (by their standards) 23-12 on the season. Despite this, the Warriors still currently hold the No. 1 seed in the Western Conference.

Speaking to reporters after the loss, Kerr didn’t seem too bothered by what he saw from his team. Instead, he focused on how much the Warriors are scrutinized in the media.

“The bar’s been set high. So, everything takes on a little greater sense of urgency in terms of what happens around the team. We’re maybe the most scrutinized team in the history of the league,” Kerr said, via Amico Hoops. “We’re right there with the (Chicago) Bulls teams that I played on. I felt the same, but even more so now because of the number of media outlets and the immediacy of the judgment and criticism. So, it’s all part of it.”

Playing with Michael Jordan in Chicago, Kerr would know a thing or two about being under the microscope. Since joining the Warriors, he’s won three championships in four seasons and was a Game 7 loss to the Cavaliers in the 2016 NBA Finals from winning four consecutive championships.

That’s not necessarily the highlight of Kerr’s remarks. In continuing to talk about the scrutiny his Warriors face and the loss to the Lakers, Kerr had this to say.

“Our guys have learned how to deal with all of that over the past few years. It doesn’t matter,” the head coach said. “What matters is how you respond to a bad loss, to a bad stretch, to injuries. As long as you keep responding, keep showing up to work, keep sticking together, keep working, good things are going to happen. That’s what I believe with this group.”

Kerr clearly isn’t worried about the optics of a loss to the Lakers in front of a national audience on the NBA’s grandest of regular season stages.

Even then, there has to be some concern here. Golden State is just 13-11 since starting the season with 10 wins in its first 11 games.

The feud between Draymond Green and Kevin Durant brought drama to an organization that has not seen it since Kerr’s arrival. With these Warriors being the target of every team in the Association, they continue to get the best effort from opponents on a game-by-game basis.

Just don’t tell that to those teams who have exposed the Warriors to an extent this year. That now includes LeBron James and the Lakers.

Golden State is just 8-8 on the road this season. If it somehow fails to land home-court advantage in the playoffs, that could be an issue in a Western Conference that boasts multiple dangerous teams. Half the conference is seven-plus games over .500 at home on the season.

Kerr should think about that before he seemingly blows off a regular season home loss to a conference rival.