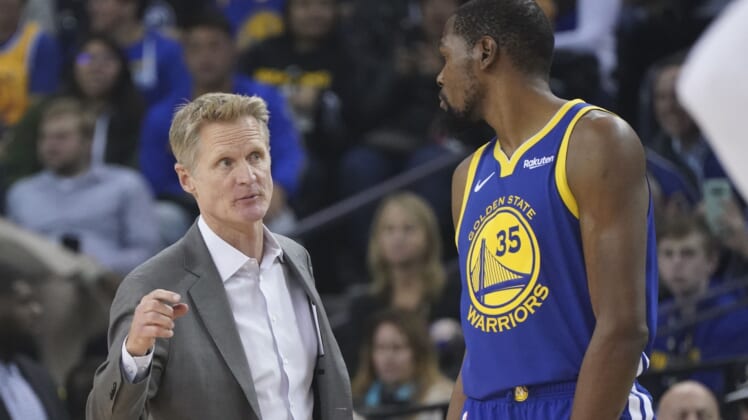 The Golden State Warriors are coming off a five-year stretch that saw them as the most talked about team in the NBA. Five consecutive NBA Finals appearances. Three championships. All-Star rosters. Two former league MVPs.

Now that the Warriors are out of the limelight and in the midst of a transition year, things are starting to come up regarding their half-decade of dominance.

Head coach Steve Kerr opened up about that on Tuesday with a rather interesting quote. Primarily, he talked about the drama that surrounded this dynasty over the years.

“It happened on national TV,” Kerr said about the Draymond Green, Kevin Durant spat last season, via Drew Schiller of NBC Sports Bay Area. “If this had happened at a practice, you can cover it up. Actually, we had several things over the past few years that never made it out, and we’re very proud of that.”

As you might remember, Green was suspended for going after Durant during an early-season loss to the Los Angeles Clippers. Durant has since admitted that it played a role in his depature in free agency this past July.

While the Warriors attempted to downplay this incident during their fifth consecutive run to the Finals, something didn’t seem right. Kerr’s comments all but confirm that.

Though, the head coach is not pointing directly at Durant and Green. Former Warriors star David West previously talked about all of the drama he witnessed during his two years with the team — drama that never made it out of the locker room.

This can’t be considered too much of a surprise. You’ve read about the drama that surrounded the Los Angeles Lakers’ dynasty of the 80s. There was drama involving Michael Jordan and the Bulls in the 90s.

As Kerr mentioned, national television and the social media world of today brings things to us in the matter of seconds. Things are more under the microscope.

Even then, it’s going to be interesting what comes up once the tell-all books are released.