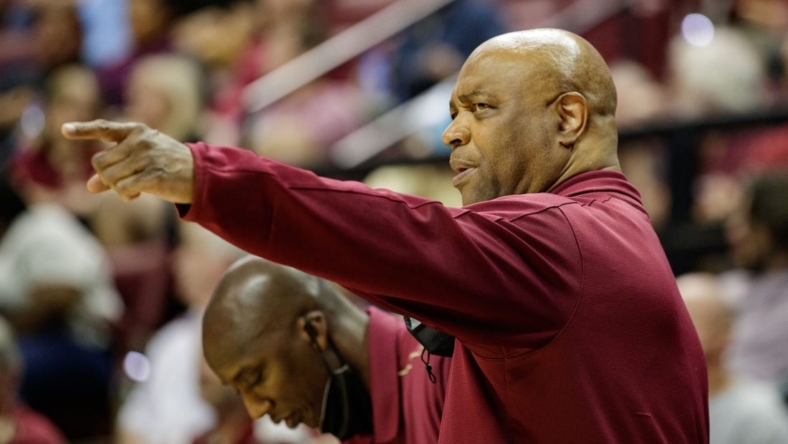 Luke Brown scored 20 of his career-high 27 points in the first half of his Stetson debut Monday night, carrying the Hatters to a stunning 83-74 upset of host Florida State in Tallahassee, Fla.

Florida State was an 18-point favorite.

A transfer who played sparingly at Ball State last season, Brown knocked down 9 of 15 field goals, including going 7-for-11 from behind the arc. He also recorded four rebounds and three assists.

Alvin Tumblin scored 15 points while Wheza Panzo went 4 of 6 from deep and had 12. Cyncier Harrison chipped in 11. Stetson went 14 of 35 from long range and held a 44-27 advantage in bench points.

The Seminoles got 16 points from Matthew Cleveland. Caleb Mills had 12 and Cameron Corhen 10, but FSU lost for just the second time in its past 48 nonconference home games.

After 17 straight winning seasons with the Seminoles, coach Leonard Hamilton sent out a group hoping to improve on a 17-14 overall mark last season.

But the Seminoles found more than enough to handle in the Stetson, an ASUN Conference school that hasn’t produced a winning season since 2000-01 in its final campaign in the Trans America Athletic Conference.

The Hatters grabbed a 14-12 lead from Florida State at 11:48 and never relinquished it.

The Seminoles finally got going, as Mills and Cam’Ron Fletcher led the way with four points apiece, but the Hatters hung in there with some strong 3-point shooting. They made six in just over 10 minutes of play and led 21-15.

Brown missed only three of his nine deep balls for 20 points as Stetson held a 44-37 edge over the Seminoles at halftime.

The home side got as close as three points in the second half, but Stetson was able to run clock and score late in their possessions to hold on for the shocking victory.