If the New England Patriots want to avoid a rocky relationship with star cornerback Stephon Gilmore during training camp, the two sides are running out of time to make things work.

New England’s 30-year-old cornerback is seeking a deal that reflects his talent and contributions to the team. While a torn quad derailed him this past season, he won Defensive Player of the Year in 2019 and is widely viewed as one of the best cornerbacks in the NFL.

The Patriots restructured Gilmore’s contract last summer, agreeing to move up a portion of his 2021 salary. With the new season approaching and in the final year of his deal, the former first-round pick is now owed just $7 million in base salary. 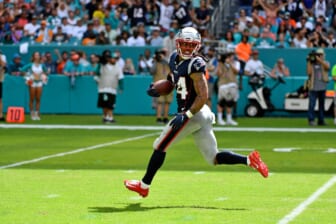 New England wants to keep its best defensive player and is hoping to avoid the worst-case scenario. But with the organization facing a tight cap situation in 2022 and Gilmore still recovery from an injury, Sports Illustrated’s Albert Breer reports talks aren’t progressing quickly.

“Part of it’s that Gilmore isn’t yet completely out of the woods in coming back from the torn quad he suffered last year. But a bigger part is where he and the team are contractually, with Gilmore’s going into the final year of his deal. My understanding is there’s been no recent progress toward either extending Gilmore, or giving him a raise for 2021, but that could change with people coming back off vacation in the coming days.”

Fortunately, there doesn’t seem to be a ton of concern from the parties involved. Gilmore predicted a positive outcome and New England is expected to increase its efforts to resolve the contractual disagreement closer to training camp.

This is a situation the organization is very familiar with as described further by ESPN’s Mike Reiss. For now, there’s a possibility New England takes the same approach it did with Richard Seymour in 2006, offering a multi-year extension based on the market rate for top players at the position.

But there’s always a chance things go south, just as they did with the Deion Branch contract dispute. Given everything at stake for the Patriots in 2021, that’s an outcome everyone should work tirelessly to avoid.