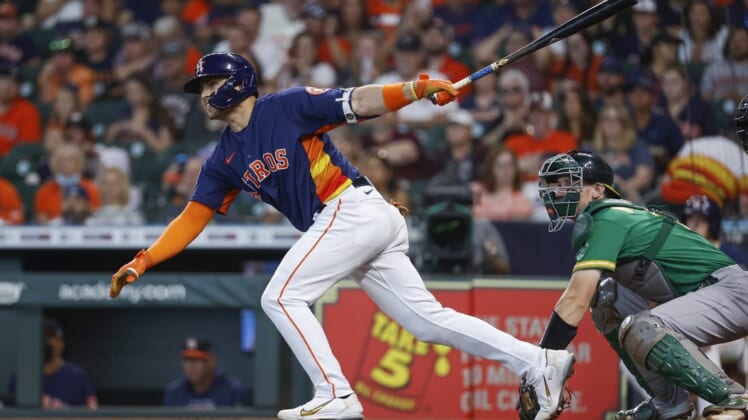 Stephen Vogt drove in a pair of runs off the bench while five relievers helped pave the way for the visiting Oakland Athletics’ 4-3 rubber-match victory over the Houston Astros on Sunday.

Vogt, who entered as a pinch-hitter in the sixth inning, finished 1-for-1 with a sacrifice fly that pulled the Athletics even and a two-out run-scoring single in the eighth that plated Chad Pinder (3-for-4, double, RBI, run). The eighth-inning rally came against Astros reliever Rafael Montero (3-1).

Vogt was the third batter to hit sixth for Oakland after center fielder Skye Bolt eventually departed after being hit by a pitch in the second inning. Dermis Garcia struck out hitting for Bolt in the fourth.

After right-hander Adam Oller allowed three runs on six hits and one walk with three strikeouts over 4 1/3 innings, Oakland reliever Sam Moll was the first out of the bullpen charged with keeping the Astros in check. He retired the final two batters of the fifth after Houston claimed a 3-0 lead when Jeremy Pena chased Oller with his 13th home run, a two-run shot to left-center.

Domingo Acevedo stranded a pair of runners in the sixth inning before A.J. Puk (2-1) worked around a one-out single from Pena in the seventh. Zach Jackson logged a perfect eighth before Oakland closer Lou Trivino notched his eighth save by retiring the Astros in order in the ninth.

The Astros dropped their first series since losing two of three to the Miami Marlins from June 10-12.

Astros right-hander Jake Odorizzi, fresh off tossing seven shutout innings at the Athletics in his previous start, appeared primed for a repeat performance. He retired the Athletics in the first and third innings and worked around a pair of two-out baserunners in the second by striking out Stephen Piscotty to end that frame. Odorizzi surrendered another two-out hit in the fourth but followed by striking out three consecutive batters to eventually carry a shutout bid into the sixth inning.

However, after retiring Vimael Machin of a fly ball to center to open the sixth, Odorizzi surrendered a solo home run to Ramon Laureano on a 3-1 fastball. When Sean Murphy and Seth Brown followed with consecutive singles, Odorizzi departed with his two-run lead in peril.

Astros reliever Ryne Stanek proved unable to preserve the advantage, surrendering a run-scoring double to Pinder and the sacrifice fly to Vogt that enabled the Athletics to draw even at 3-3.

Odorizzi allowed three earned runs on five hits with five strikeouts and no walks over 5 1/3 innings.