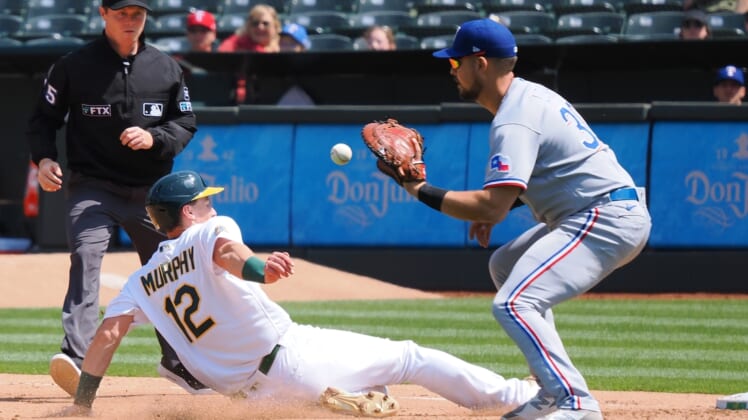 Stephen Piscotty’s two-run home run was all Oakland needed as the Athletics outlasted the visiting Texas Rangers 2-0 on Sunday in the finale of a three-game American League West series.

Cole Irvin (2-1), the first of four Oakland pitchers, allowed just one hit and walked two in five innings of work to earn the win. Irvin struck out four in his 87-pitch stint and allowed the Athletics to salvage the final game of the series.

Dany Jimenez worked out of a two-on, two-out jam in the ninth inning to earn his third save. Jimenez has not allowed a run in seven appearances this season.

Piscotty’s homer with one out in the bottom of the fourth off Spencer Howard plated Sean Murphy and produced more runs than the Athletics had scored in the first two games of the series combined. Oakland managed just five hits in the win — and 10 in the three games in this series — and squandered seven base runners on Sunday.

Oakland loaded the bases with one out in the fifth but could not extend the lead when Brett Martin struck out Murphy and Christian Bethancourt to end the threat.

Texas came into the game on a season-best three-game winning streak but was limited to just four hits and didn’t get a runner to second base until Marcus Semien’s two-out double in the eighth. Semien is a former Oakland player who finished third in American League voting for the Toronto Blue Jays last season and was signed by the Rangers in the offseason.

Nathaniel Lowe and Johan Heim singled in the ninth but were stranded when Willie Calhoun grounded out to end the contest.

Garrett Richards was the opening pitcher for the Rangers, leaving after two innings for Howard (0-1). Howard was followed to the mound by Albert Abreu, Martin, Dennis Santana, and Kolby Allard.

Texas heads home to begin a four-game series against Houston on Monday while the Athletics have an off day on Monday before hosting the San Francisco Giants for the two-game, interleague, Bay Area series.