Stephen Jones: We would take Dak Prescott over Ezekiel Elliott in hindsight 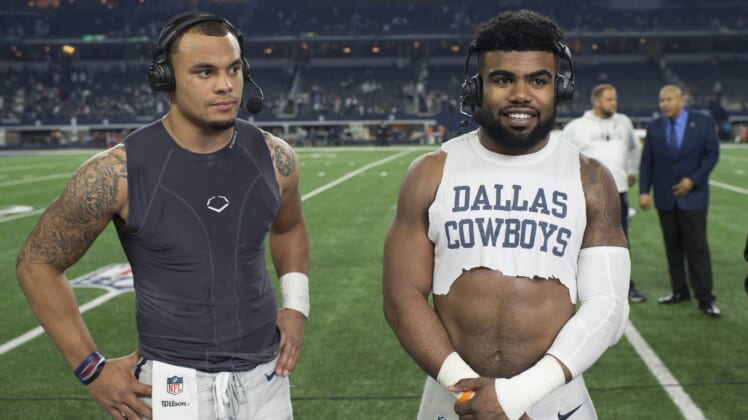 The Dallas Cowboys picked two rookie rock stars in 2016. One, obviously, was running back Ezekiel Elliott, who was a slam-dunk first-round prospect. Then the Cowboys chose quarterback Dak Prescott in Round 4. The young quarterback has turned out to be an absolute gem, on and off the field. He started all 16 games, leading the Cowboys to a 13-3 record and the top seed in the NFC.

Looking back in hindsight at the picks, executive vice president Stephen Jones revealed the team would draft Prescott No. 4 overall instead of Zeke if they had to do it all over again.

“Are you kidding me,” Jones said incredulously, per Clarence E. Hill Jr. of The Star Telegram. “To get a guy of this caliber, if you knew Dak would be Dak he would be picked at the top of the draft. We would have picked him with the fourth pick. I love Zeke, but based on his performance last year, I can’t imagine Dak wouldn’t have been the first pick in the draft. Obviously, good fortune smiled upon us. He’s done nothing but get better from the day he walked in the door.”

It is hard to live life with a “would-have, should-have” frame of mind. The bottom line is the Cowboys scored huge with both picks and would have missed out on a dynamic running back if they had good reason to select Prescott fourth overall. That said, top quarterbacks are valued so much higher than running backs because of their ability to tilt the scales in favor of their teams.

For now, the Cowboys are enjoying the security of what Prescott brings to the table. He is already evolving into a natural leader, and it is hard to believe he would have a bone to pick with anyone.

On the opposite side, the Cowboys must deal with their firecracker running back, who is already gaining negative attention in some frustrating ways.

The show must go on whether the Cowboys have Elliott all of part of the year in 2017. Thankfully, Prescott looks to remain a calming presence the team can rely on all season.