Stephen Jones: Dez Bryant’s sideline antics ‘can be a distraction’ 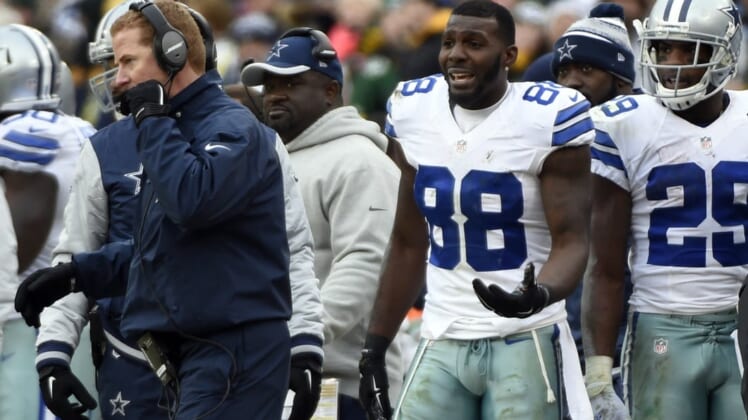 The Dallas Cowboys are facing an interesting dilemma as it pertains to their star receiver, Dez Bryant. He’s due to cost $16.5 million against the cap in 2018 but his production in recent years doesn’t come anywhere near warranting that kind of cash.

The Cowboys could save just over half that much by cutting him. And based on comments made by executive vice president Stephen Jones on Monday, it sure sounds like that option isn’t off the table.

“The Dez situation has a lot of moving parts to it when you look at it,” Jones said during an appearance on the Cowboys’ Hangin’ With The Boys podcast (h/t Kate Hairopoulos of SportsDay). “First of all … the football relationship between Dak and Dez is different than Tony [Romo] and Dez. Tony certainly his game, they kind of tailored it to one another. When Dak came in, he certainly is not going to play the game exactly like Tony played the game. I think it hasn’t ever just hit on all cylinders yet in term of how the Dak-and-Dez the connection works. I think it’s a work in progress. I think it could improve if given the opportunity.”

Now, here’s where things get interesting. Jones switches gears and focuses on Bryant’s influence on the club.

“Of course we pay Dez a lot of money, and he knows that. He’s as aware of it as anybody. … He knows when you get paid that kind of money there’s high expectations in terms of the productivity. … Those are all things we have to look at as a team, as an organization when we start to put our team together next year.”

Now if that doesn’t sound like a team that’s toying with the idea of moving on, I don’t know what does.

Bryant was one of the most dangerous receivers in all of football between 2011-2014. He caught 336 passes for 4,863 yards and 50 touchdowns in that four-year span. Since then, however, he’s managed to average just 50 catches for 678 yards and less than six touchdowns per year.

Injuries have contributed to Bryant’s decline, to be sure. So also has the transition from Romo to Dak Prescott.

When the receiver was putting up those ungodly stats before, it was much easier to put up with his emotional outbursts (like this). Now that he’s in a clear decline, it’s much harder to justify dealing with that problem anymore.

For what it’s worth, I’m inclined to think the Cowboys will try to get Bryant to renegotiate his current deal. If he opts not to play ball, he’ll likely be released.