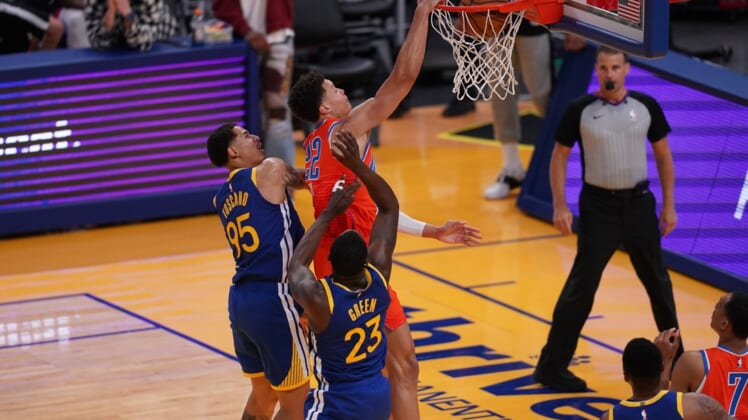 Stephen Curry scored 49 points to lead the Golden State Warriors to a 136-97 blowout win over the Oklahoma City Thunder on Saturday in San Francisco.

The Warriors remained in eighth place in the Western Conference with their second consecutive win over the Thunder and fourth win in five games.

Most of Curry’s scoring came in the first and third quarters.

He scored 24 of Golden State’s 37 points in the first, hitting a pair of 3-pointers in the game’s first 70 seconds and then scoring 10 points in the final minute and a half to help the Warriors start to put the game away.

Curry then scored 22 more in the third, hitting five more 3-pointers in the frame, to record his NBA-leading 10th 40-point game of the season.

In three games against the Thunder this season, Curry hit 28 3-pointers and averaged 41.7 points per game.

Saturday, with the Warriors leading by 39 heading into the fourth, Curry didn’t play in the final quarter.

In sweeping the season series, Golden State won the three games against Oklahoma City by an average of more than 32 points per game.

Curry wasn’t the only Golden State player with a big game.

Draymond Green had 15 points and 13 assists. In the second quarter, when Curry scored just three points, Green had 10 points and five assists to help the Warriors stretch their lead to 25 at the break.

Green was 5 of 8 from the floor with a trio of 3-pointers.

The Warriors shot 58% from the floor and 50% from beyond the arc.

Svi Mykhailiuk led the Thunder with 17 points off the bench while Luguentz Dort added 16 points.