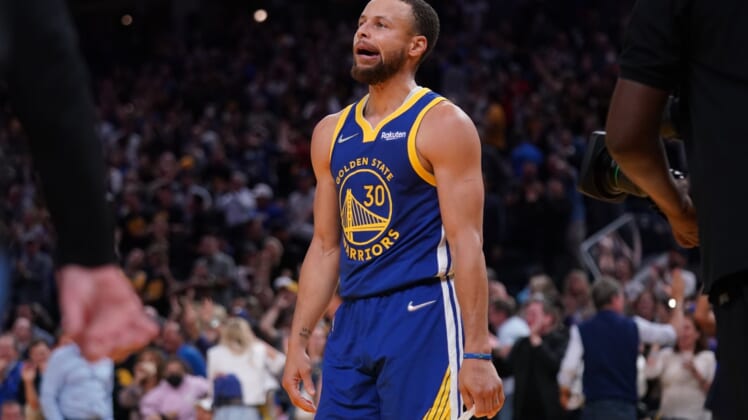 Stephen Curry and Jerome Bettis — champions in their sports — will add another title on Sunday: college graduate.

Curry will graduate from Davidson College in North Carolina with a bachelor of arts in sociology, and Jerome Bettis finally will earn his business degree from Notre Dame.

Curry won’t be on hand to put on the cap and gown. Instead, the three-time NBA champion is with the Golden State Warriors, who will meet either the Phoenix Suns or Dallas Mavericks in the NBA’s Western Conference final.

13 years after entering the NBA, Stephen Curry is a college grad.

Stephen completed his final semester of coursework this spring and will receive a Bachelor of Arts degree with a major in Sociology from Davidson College.

Congrats to the Class of 2022! pic.twitter.com/R3giuMtPDx

“Davidson College looks forward to an opportunity on campus in the future when we can present his diploma,” the school posted on Twitter Sunday morning.

Curry, 34, played three seasons at Davidson and left school when the Warriors selected him with the No. 7 overall pick in the 2009 NBA Draft. He was one semester short of graduation.

In its statement on Twitter, Davidson said Curry enrolled in school for the spring semester and worked with two members of the Davidson faculty — one at Stanford and the other at UC Santa Cruz — to finish his degree requirements.

The wait for the diploma was much longer for Bettis, who skipped his senior season to enter the NFL draft in 1993. The Los Angeles Rams selected him with the No. 10 overall pick, and he went on to win the Super Bowl with the Pittsburgh Steelers.

He was enshrined in the Pro Football Hall of Fame in 2015.

Now 50, he attended classes at Notre Dame to fulfill his degree — and a vow he made to his mother.

“I promised her years ago, sitting in Coach (Lou) Holtz’s office, that I would come back and graduate,” Bettis said recently on the Pod of Gold podcast. “So, I owe that to her as well.”

A promise made, a promise kept. 28 years after leaving @NotreDame, I’ve completed my degree from the Mendoza School of Business. I hope my journey serves as reminder that education is the true equalizer in life and it is never too late to start. pic.twitter.com/J0Xn7Up47n

Back on campus, Bettis did things typical college kids do — like attending school basketball games and took part in group projects. He also spent time around the football team.

He told ND Insider he’s going to apply what he learned in class to the businesses he owns.

“I am so excited,” Bettis said. “It’s a culmination of years and years of wanting to get it done. Having started something and being able to now complete that task is a big point of emphasis for me.”