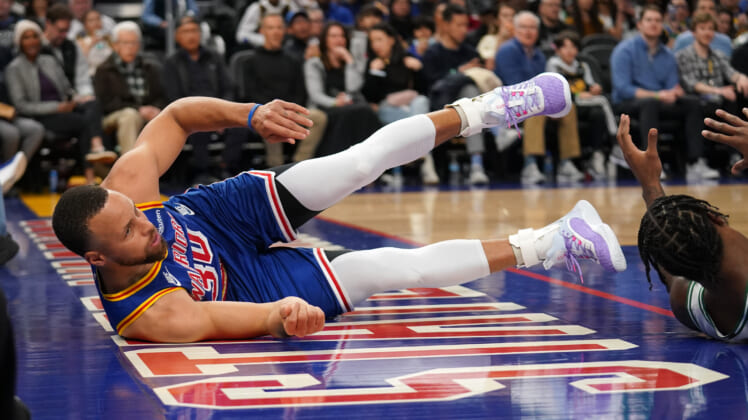 Just when it looked like Stephen Curry and the Golden State Warriors were going to be fully healthy for the first time in nearly three years, the unimaginable has happened.

Taking on the Boston Celtics Wednesday evening, Curry was injured while scrambling for the ball against Celtics guard Marcus Smart. His opponent seemed to roll up on the two-time MVP’s foot, causing Curry to leave the game in a tremendous amount of pain. He was ruled out almost immediately.

We now have an update on the Curry injury courtesy of Shams Charania of The Athletic. It’s not great. The NBA insider reports that Stephen Curry has suffered a sprained ligament in his left foot that will sideline the start guard indefinitely.

Warriors head coach Steve Kerr was seen going after Smart verbally after the play that caused Curry’s injury. Those watching the game will also notice that Smart was called for a flagrant on the following play for pretty much kicking Klay Thompson on the other end of the court.

It would be foolish to believe Smart was attempting to injure Curry. However, the play was about as reckless as it gets.

At 47-23 on the season and as the third seed in the Western Conference, Golden State has 12 games remaining in the regular season. It will close up shop on the regular year against the New Orleans Pelicans on April 10. That’s roughly three weeks from now.

NBA insider Jordan Schultz indicates that there’s a belief Curry will miss three weeks of action. That could potentially have him back for the start of the playoffs April 16. That’s the good news.

The bad news is two-fold. Draymond Green had just returned for his second game back from injury Wednesday evening against Boston. Meanwhile, Klay Thompson missed the previous two seasons due to injury.

Wednesday night’s matchup represented just the second time that the trio has played together in a game since the NBA Finals back in June of 2019. It will be roughly three years before the legendary trio plays their third game together during that span should Stephen Curry actually return in the playoffs.

As for the remainder of the regular season, Golden State was blown out by Boston to end its four-game winning streak.

The team is currently one game behind the Memphis Grizzlies for the second seed in the Western Conference. It is also 3.5 games ahead of the Jazz and Mavericks for that third seed.

With Curry sidelined, the expectation is that Golden State will rely more on stud young guard Jordan Poole. The 22-year-old former first-round pick has picked it up big time recently, averaging 24.8 points on 53% shooting from distance over the past eight games.