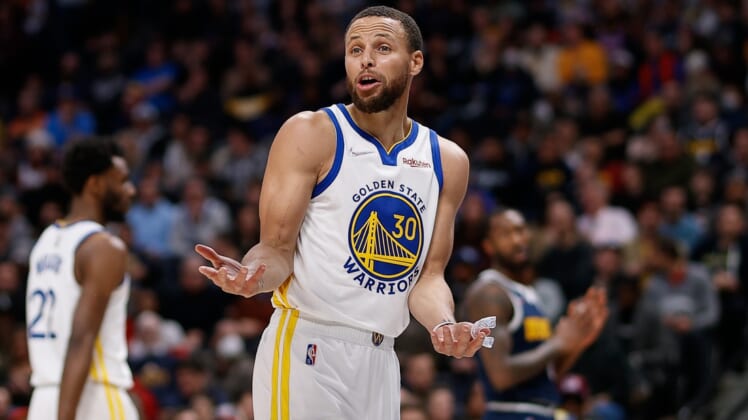 Stephen Curry scored 34 points to surpass 20,000 for his career and added nine rebounds as the visiting Golden State Warriors beat the Denver Nuggets 113-102 on Thursday night.

Jordan Poole had 21 points, Klay Thompson and Jonathan Kuminga scored 18 apiece and Kevon Looney had 10 for Golden State, which salvaged the finale of the four-game season series against the Nuggets.

The Warriors have won two in a row since losing 131-124 at Denver on Monday, when they rested Curry, Thompson and Andrew Wiggins.

Nikola Jokic finished with 23 points, 12 rebounds and nine assists and Monte Morris scored 19 points for the Nuggets, who had won 10 of their previous 11 games. Jeff Green had 11 points, Aaron Gordon amassed 10 points and 11 rebounds and Bones Hyland also scored 10.

The Warriors opened the fourth quarter on an 8-3 run to lead 96-87 before Denver rallied.

Morris and Jokic each made two baskets in an 8-0 surge that tied the game at 98. Thompson missed a 13-footer on the other end, and Morris hit a jumper to give the Nuggets a two-point lead. Curry then made three inside shots around two free throws by Gordon to put Golden State ahead 104-102 with 1:59 left.

Denver turned the ball over on two straight possessions and Poole hit two 3-pointers to seal the outcome.

Poole’s layup early in the second quarter gave Golden State a 35-32 lead, but the Nuggets responded with 15 consecutive points to go ahead by 12.

Thompson scored five points in a 9-0 run that pulled the Warriors to within a point, but Denver scored the last eight points of the quarter to lead 60-51 at halftime.

The Nuggets went ahead 72-58 on a layup by Austin Rivers, but then Golden State got going.

DeMarcus Cousins’ free throw and dunk got the lead back to three before Curry hit two 3-pointers — the second of which gave him 20,000 career points — to end the third on an 8-1 run to lead 88-84 heading into the fourth.