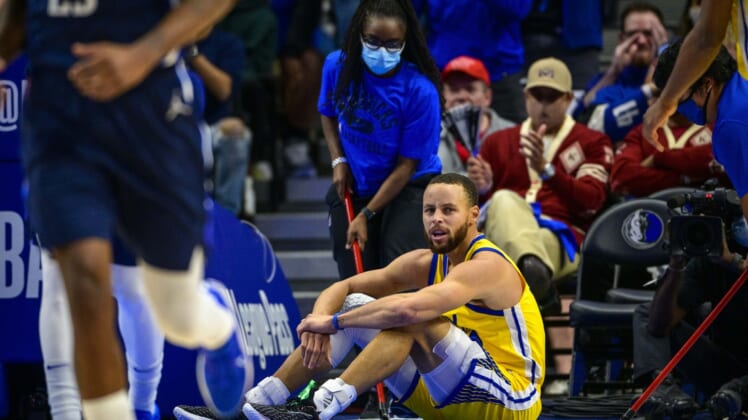 Now he has a quad contusion that could keep him out of the Warriors’ game against the Pelicans on Thursday night in New Orleans.

Curry sustained the injury in a 99-82 loss to the Mavericks in Dallas on Wednesday night.

“He got a pretty good quad contusion,” Warriors coach Steve Kerr said. “And those generally get worse overnight, and with a flight and everything there’s a chance he won’t play (against the Pelicans).”

Two nights earlier in a win against Miami, Curry scored a season-low nine points, shooting 3 of 17 from the floor, including 1 of 10 on 3-pointers.

“The body of work over the course of this year’s been pretty solid,” Curry said. “This stretch has not been great, not up to my standards. So, you’ve just to stick to the program. It’ll come around.”

The Warriors, who shot a season-worst 17.9 percent on 3-pointers (5 of 28) against Dallas, might be able to regain their shooting touch against the Pelicans, who have allowed an average of 124.7 points during their current three-game losing streak.

This game could be Warriors’ final one before the return of shooting guard Klay Thompson, who hasn’t played in more than two years because of ACL and Achilles tears. Golden State reportedly is optimistic that Thompson will be able to play at home against Cleveland on Sunday night.

New Orleans won five of its last six games before New Year’s, but the schedule at the start of 2022 has not been kind. The Pelicans’ losing streak started with a road loss against defending champion Milwaukee on Saturday.

The game against Golden State concludes a homestand featuring the top three teams in the Western Conference in four days. The Pelicans lost to Utah 115-104 on Monday and to Phoenix on Tuesday, 123-110.

“We’re competing to the end,” said guard Devonte’ Graham, who scored a season-high 28 against the Suns. “Honestly, that’s why Utah and Phoenix are top teams and they know how to finish the games.

“Guys get to their spots, and they just make plays down the stretch. That’s just what it was. We didn’t get stops when we needed to; they did, but we played great.”

New Orleans announced Wednesday that Zion Williamson will continue his rehab from foot surgery away from the team but under the supervision of the organization’s medical staff. There is no timetable for Williamson’s return.

During Williamson’s season-long absence, Brandon Ingram has been the Pelicans’ leading scorer, but he struggled against Utah and Phoenix after returning from a two-game absence due to Achilles soreness.