The brand-new and very expensive Stefon Diggs contract that the Buffalo Bills agreed to is a massive deal for the star wide receiver. However, how much of the $104 million in that four-year extension will Diggs actually receive? Let’s take a look at the details of the new pact.

On Wednesday, ESPN NFL insider Adam Schefter broke the news that the Buffalo Bills locked up the two-time Pro Bowler for many more years to come. The new deal is reportedly for $104 million, with $70 million of it guaranteed. However, unlike Deshaun Watson and the Cleveland Browns, the contract isn’t fully guaranteed and there will come a point where the Bills will have an out if Diggs’ regressed in his production over the next few seasons.

Analyzing the details of the Stefon Diggs contract

On Friday, Mike Florio of Pro Football Talk revealed the complete details of the Stefon Diggs contract, and when the guaranteed paydays cease. For the upcoming season, Diggs’ base salary is only $2.57 million dollars. That is a fantastic use of the salary cap for the team and makes a lot of sense after signing free-agent linebacker Von Miller to a sizable deal a few weeks ago.

How Buffalo Bills protect themselves long-term in new Diggs deal

Essentially, the four-year, $104 million extension is really a two-year deal with $22.01 million guaranteed. In 2025 the team will have a decision to make. If Diggs is still playing at a top-10 level they can decide to pay him another $18 million, or eat the $3.51, and send him on his way. If the Diggs-Bills marriage did come to an end before the 2025 season, the star wideout would still do very well for himself.

That’s because $70 million is still guaranteed over the next few seasons when factoring in his previous deal and the added seasons. Along with the per season numbers, Florio also revealed that Buffalo will hand Diggs a massive $21.5 million signing bonus check with the extension. 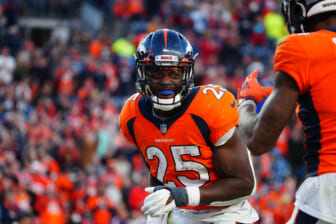 Also Read:
Baltimore Ravens closing in on a deal with free-agent Melvin Gordon

The Buffalo Bills could have a difficult decision — or maybe not — in a few years, and while they have given Diggs a serious amount of money, they also protected themselves if he does start to decline after year three when he is closing in on 32. However, that is a problem for then, and the combination of Diggs and quarterback Josh Allen will be huge in helping the Bills maybe get their first Super Bowl title in the next few seasons.