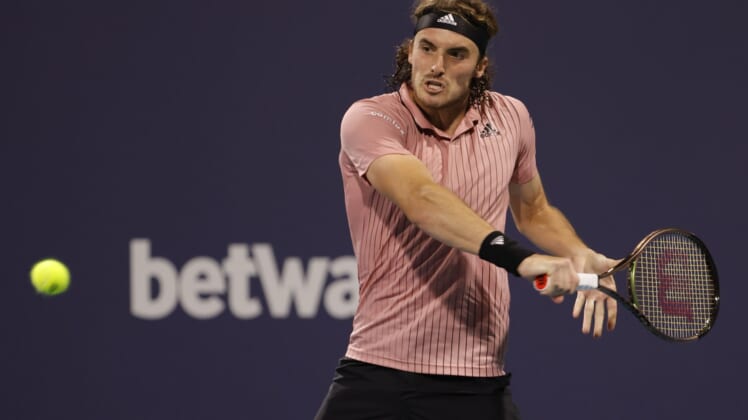 Stefanos Tsitsipas will defend his Monte Carlo Masters title against upstart Alejandro Davidovich Fokina, who will be playing in his first career ATP final on Sunday in Monaco.

The third-seeded Tsitsipas took down No. 2 Alexander Zverev of Germany 6-4, 6-2 in Saturday’s semifinals after the unseeded Davidovich Fokina outlasted Bulgaria’s Grigor Dimitrov 6-4, 6-7 (2), 6-3.

Davidovich Fokina, whose dream run to the Masters 1000 final includes a second-round upset of top-ranked Novak Djokovic, entered this tournament with a 4-9 record in 2022 and just one win against a Top 100 opponent this season.

“I am so, so happy to be in the final. It is a dream come true,” Davidovich Fokina said in his on-court interview. “When I was a kid I was dreaming about this day. It is a dream and I am so happy.”

The 22-year-old Spaniard recovered nicely after squandering a 5-3 lead in the second set and falling behind 2-0 in the deciding set. Davidovich Fokina survived four break points to win an epic third game in the third set, then used that momentum to finish off Dimitrov in two hours and 42 minutes.

“That hold gave me power to keep pushing,” Davidovich Fokina said. “Now I am in the final and I will enjoy it and try my best.”

Tsitsipas won both of their previous matches, including the quarterfinals of this tournament last year. Davidovich Fokina retired due to injury after losing the first set, 7-5.

Tsitsipas, a 23-year-old Greek, returned to the final by making quick work of Zverev in 75 minutes on Saturday. Tsitsipas will attempt to become the first player to defend the title in Monaco since Rafael Nadal won three straight years from 2016-18.

Tsitsipas struck eight aces and won 75 percent of the points (21 of 28) on his first serve, compared to 53 percent (17 of 32) for Zverev. Tsitsipas converted five of eight break points and showed no signs of fatigue after surviving a 6-2, 6-7 (3), 6-4 quarterfinal clash Friday night against Diego Schwartzman of Argentina.

“It was good,” said Tsitsipas in his on-court interview. “I don’t know whether the long match (against Schwartzman) gave me some rhythm, but I was able to play good tennis today. I’m happy with the level I was able to execute and come up with some good ideas on the court.”

He said Davidovich Fokina will present a challenge.

“It’s going to take a little bit more,” Tsitsipas said. “He’s on a good run, in a good rhythm. I’ve played him before, he’s a good opponent, I’ve had big battles against him and I’m going to try and be as ready as possible.

“I know he’s improved from before and I’m going to have that in the back of my head, to produce the best tennis that I can.”