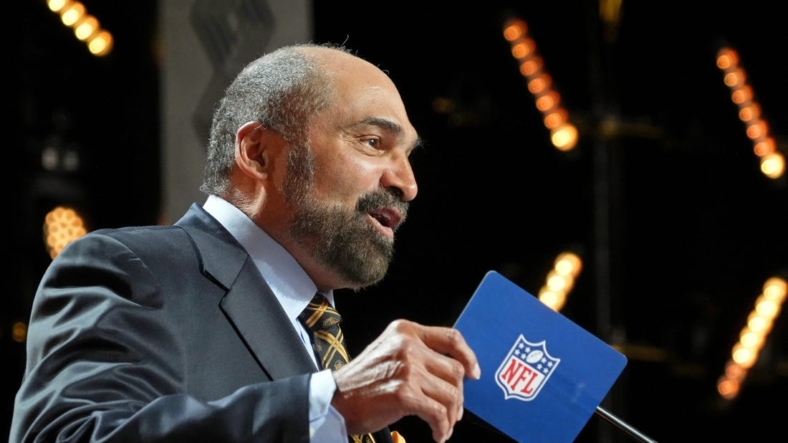 The Pittsburgh Steelers will retire the No. 32 worn by running back Franco Harris in December to commemorate the 50th anniversary of the play known as the “Immaculate Reception.”

Harris will become just the third member of the legendary Steelers franchise — the winner of six Super Bowls — to have his number retired, joining Joe Greene (75) and Ernie Stautner (70).

The retirement ceremony will take place on Dec. 24, when the Steelers host the Las Vegas Raiders.

#Steelers President Art Rooney II just announced that @francoharrishof's No. 32 will be retired by the team at halftime of our Week 16 game against the Raiders. pic.twitter.com/5KYLOxVLsR

The “Immaculate Reception” was selected as the greatest moment in NFL history as part of the NFL 100 celebration in 2019.

It occurred Dec. 23, 1972, in a playoff game in Pittsburgh between the Steelers and then-Oakland Raiders. With the Steelers down 7-6 with 22 seconds to play and fourth-and-10 at their own 40-yard line, quarterback Terry Bradshaw scrambled, then threw a pass intended for John “Frenchy” Fuqua. After bouncing off Raiders safety Jack Tatum, the ball wound up in the hands of Harris, a 22-year-old rookie who ran it into the end zone for the game-winning, 60-yard score.

“You talk about Christmas miracles. Here’s the miracle of all miracles,” said play-by-play man Curt Gowdy, who was calling the game for NBC.

A member of the Pro Football Hall of Fame, Harris was selected to nine Pro Bowls, won four Super Bowl titles and was the MVP of Super Bowl IX during his career with the Steelers (1972-83) and Seattle Seahawks (1984). He gained 14,407 yards from scrimmage and scored 100 touchdowns in 173 games (162 starts).