Steelers seem to be delaying the inevitable with Le’Veon Bell 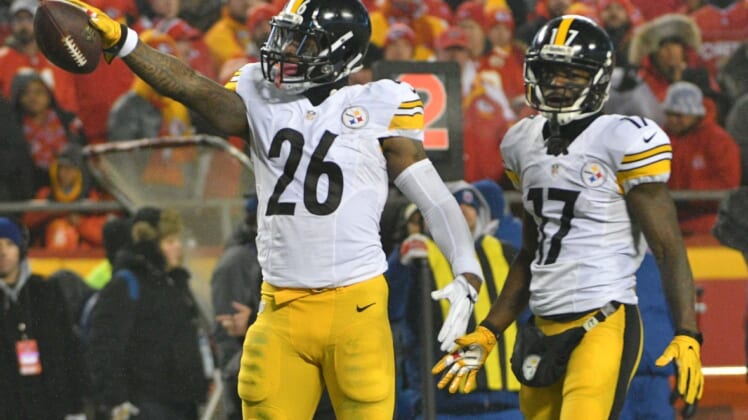 As the Pittsburgh Steelers take on the Jacksonville Jaguars Sunday for an opportunity to play in the AFC Championship Game, there’s one dark cloud hanging over the team.

We were all taken aback by the words from star running back Le’Veon Bell last week threatening to sit out the entire 2018 season or retire altogether if he were franchised once again (more on that here).

Now comes this report from NFL Media’s Ian Rapoport noting that Pittsburgh does indeed plan to franchise Bell once again this offseason.

From @NFLGameDay: #Steelers RB Le'Veon Bell told @JFowlerESPN this week he may retire if tagged. Well… a franchise tag is likely coming. What happens next? pic.twitter.com/n2UzFTBDgF

If that’s the case, there’s going to be a major stare down taking place between the Steelers and Bell when spring hits. The team has in the past offered him a long-term contract that would make Bell the highest-paid running back in the NFL.

But coming off a 2017 campaign in which he earned $12.1 million under the franchise tag, this isn’t enough for the All-Pro running back. He wants to redefine the running back market in an NFL where players at this position just aren’t valued at the level they used to be.

Keep in mind, LeSean McCoy had the second-largest cap hit in 2017 among running backs at just under $9 million. Chris Ivory came in No. 3 at $6.97 million. That’s a major drop off from what Bell earned in 2017.

It’s also important to note that the 2018 franchise tag figure for running backs is expected to actually decreased from $12.1 million to $12 million. That surely plays a role in Bell’s thought process right now.

For Bell, it’s readily apparent he values himself as a mid-tier starting quarterback in the NFL. That would mean north of $15 million annually on a long-term deal. For someone that’s coming off a regular season in which he touched the ball over 400 times in 15 games, it’s a reasonable argument to make.

On the other hand, the Steelers are going to utilize the current market at running back in negotiations. Sure Bell will reset said market, but by how much? That’s the biggest issue for the two sides here.

Maybe the Steelers will be open to talking to other teams about a trade should they franchise Bell. No team is going to yield the two first-round picks necessary to sign him under the franchise tag tender. But a first-round pick might not be out of the equation.

That’s where a team like the San Francisco 49ers and their seemingly never-ending financial resources come into play. San Francisco could be in the need for a running back with Carlos Hyde set to hit free agency.

The team will have north of $120 million in cap room this offseason. It has also been linked to Penn State’s Saquon Barkley in the draft. Maybe GM John Lynch and Co. would be willing to give up a first for Bell. He’d make a nice backfield tandem with Jimmy Garoppolo.

In any event, the situation as it’s currently presented is not sustainable for Bell or the Steelers. Handing him the franchise tag this offseason really won’t change that. And it would only delay the inevitable…Bell departing for greener pastures.