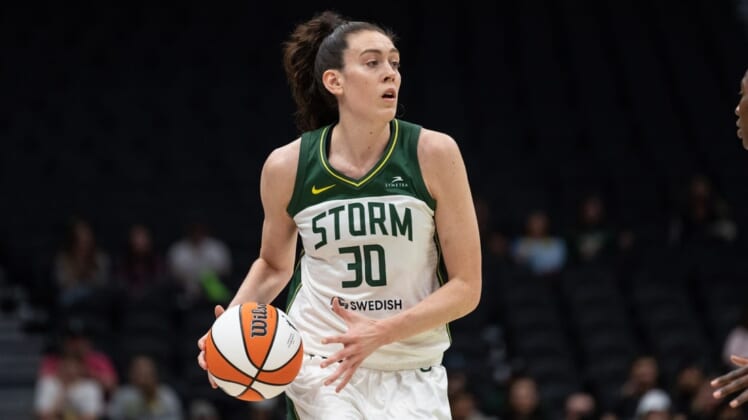 The Seattle Storm will aim to advance to the second round of the WNBA playoffs for the fifth straight season on Sunday when they host the Washington Mystics.

The fourth-seeded Storm took the first step in that quest with an 86-83 victory over the fifth-seeded Mystics on Thursday in the opener of their best-of-three series. Game 3, if needed, would be Wednesday in Washington, D.C.

Breanna Stewart finished with 23 points on Thursday, marking the 11th time in her past 15 games that she has scored at least 20. The two-time WNBA MVP also had 12 rebounds to give her six double-doubles during that stretch.

Jewell Loyd scored 12 of her 16 points in the final 4:52 of the contest for Seattle.

“I got shots early … they didn’t go in,” Loyd told reporters. “I stayed patient, I was able to get to my spots. That’s what (the postseason) is about.”

“The fact that Jewell just stuck with it, that just shows that she’s a vet,” Stewart said in a postgame interview with ESPN. “We’re not rookies anymore, we’ve been here for a while. We know what to do, and we just stick with the game.”

Washington’s Elena Delle Donne scored 11 of her 26 points in the fourth quarter while playing in her first playoff game since the 2019 WNBA Finals. The two-time league MVP made 11 of 17 shots from the floor, however she misfired on all four of her 3-point attempts.

Natasha Cloud, who joined Ariel Atkins with 16 points for the Mystics, said she isn’t dwelling on committing a costly turnover late in the game on Thursday.

“If I was a younger player, I would be hanging my head a lot more,” Cloud said of her turnover with 25.8 seconds left and her team trailing by one. “But the reality is that one turnover didn’t decide the game. We made mistakes before that, but I do need to take care of the ball down the stretch. That’s my job is to put us in successful situations, so it’s a tough one.”