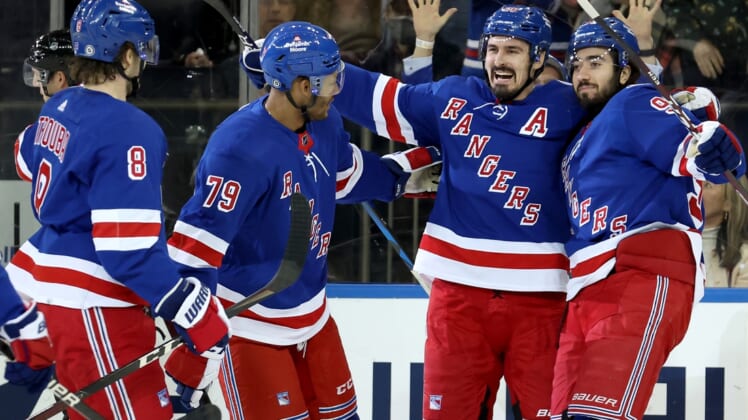 The New York Rangers look to continue their push up the standings Sunday when they host the Buffalo Sabres.

The Rangers are within reach of top spot in the Metropolitan Division, currently held by the Carolina Hurricanes, with the Pittsburgh Penguins also in their way. They’ve earned wins against both clubs of late, most recently a 5-1 triumph against Pittsburgh on Friday.

That boosted New York to 5-2-0 in its past seven games. The Rangers have done it with consistency, never losing more than two in a row since early November (when they went 0-1-2), and they haven’t lost three straight in regulation at any point this season.

“We were upset the other night,” he noted about Tuesday’s 7-4 loss in New Jersey. “We had two good games in a row … then we played in New Jersey and there wasn’t a whole lot in the tank there. It’s good when you can shake things off like that and come back and play one of your best games of the year.”

Chris Kreider continues to have a remarkable season, scoring another two goals against the Penguins to bring his career-best total to 44 – 16 more than he’s ever had in his 10-year career.

The Sabres are 7-3-1 in March after a shootout loss Friday to the Washington Capitals. The 15 points matches their output from January and February combined, with wins coming against top contenders including the Penguins, Toronto Maple Leafs and Calgary Flames.

“It shows that we’ve taken a lot of steps and we’re definitely more confident against those (top) teams,” forward Victor Olofsson said. “I think it really shows just a confidence in every line and ‘D’ pair out there. We’ve been very hard to play against it feels like so we’re definitely on the right path.”

Tage Thompson and Jeff Skinner continue to battle it out for goal-scoring leader on the team, with Skinner tallying twice against Washington to move within one of team-leader Thompson (27).

Thompson has five points in a four-game point streak and seven points in his past six games, while Skinner has three goals and four points in a three-game streak.

The offense has tailed off a bit for the third member of that top line, Alex Tuch, who has just one goal in regulation and six assists in his past 17 games. But Sabres coach Don Granato said he isn’t concerned.

“He was a little disappointed that he hasn’t produced lately,” Granato said. “I said, ‘Tucher, you won us a game the other night.’ He won us a game in the shootout. Doesn’t count as a goal in the standings but what a goal to win in a shootout.

“Points will just follow his effort flow and him getting in the moment and having fun playing the game hockey.”

Forward Cody Eakin and defenseman Colin Miller did not practice Saturday but Granato said both “should play” against the Rangers.