Stars wrap up playoff spot despite OT loss to Coyotes 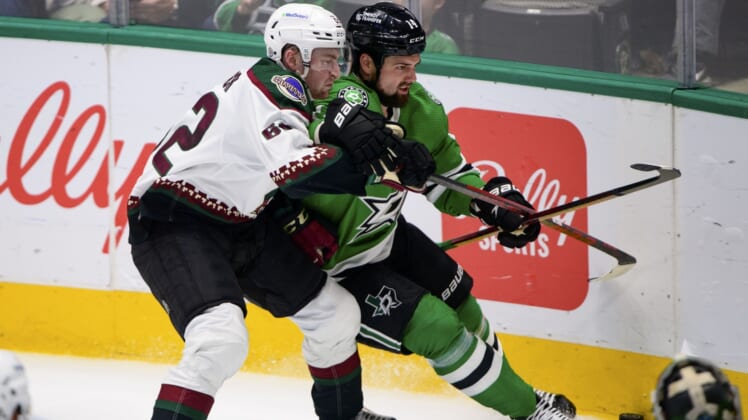 The Dallas Stars clinched the final spot in the Stanley Cup playoffs by earning a point for a 4-3 overtime loss to the visiting Arizona Coyotes on Wednesday.

Tyler Seguin had a goal and an assist, Jani Hakanpaa and Miro Heiskanen scored and Joe Pavelski logged two assists for the Stars (45-30-6, 96 points). Scott Wedgewood made 33 saves.

Hakanpaa struck on the Stars’ first shot of the game to give the hosts a 1-0 lead at 4:42 of the first period. Seguin won the faceoff back to defenseman Esa Lindell, who fed Hakanpaa for a one-timer from the blue line that hit a Coyotes player on its way to net.

Arizona had the first four shots of the game at that point.

Seguin scored at 13:48 of the first to make it 2-0. After a Coyotes turnover allowed the Stars to maintain pressure in the offensive zone, Sateri stopped Jason Robertson’s shot from the top of the left circle, but the puck rolled behind him to the other side of the crease. Seguin, in a battle with Stralman, pushed the puck into the net.

Heiskanen extended the gap to 3-0 on the power play at 2:58 of the second period. With Dallas on a five-on-three advantage, John Klingberg dished off to Heiskanen, who wired a forceful one-timer from the top of the right circle that exited the net as quickly as it entered as it beat Sateri top shelf.

Stralman got the Coyotes on the board at 3:43 of the third period, taking a pass from Nick Schmaltz inside the blue line and skating the to slot to make it 3-1.

Gostisbehere narrowed the deficit to 3-2 at 7:20 when his shot from the left point deflected off Robertson and pinballed its way far side past Wedgewood.

The winning play started with Arizona’s Kyle Capobianco bringing the puck from his own end to the attacking zone. Capobianco skated past the right circle, then backhanded a pass to Boyd in front, and Boyd’s forehand shot beat Wedgewood.