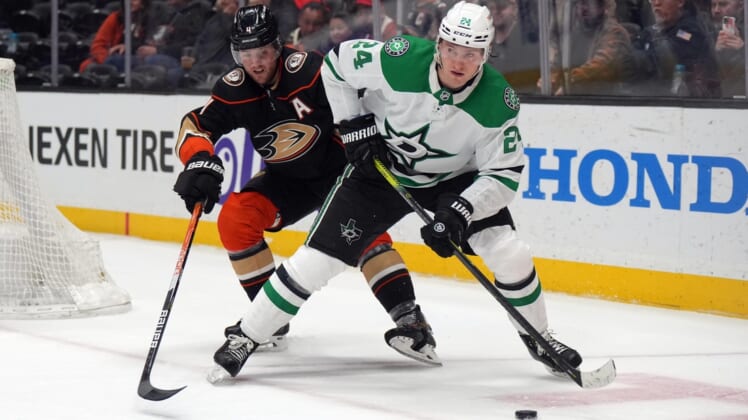 Two days after the Dallas Stars put together a two-goal rally in the third period to defeat the Anaheim Ducks and aid their playoff cause, the teams will run it back again in California.

Roope Hintz and Jacob Peterson scored goals in less than a four-minute stretch of the final period to give the Stars their fifth victory in their past seven games. The comeback also put Dallas into a Western Conference wild-card spot, at least for the time being.

The game was the first between the Stars and Ducks since January of 2000. Now they will play their second in a span of three days, in the same venue at Anaheim. A third game will come on the final day of the regular season for each team.

The Ducks, meanwhile, are limping toward the finish. Tuesday’s defeat was their 10th in a row, and while goalie John Gibson was solid in making 29 saves, he was unable to hold off Dallas, which took the lead on Peterson’s goal with 7:24 remaining.

Radek Faksa scored a first-period goal for the Stars, while Jake Ottinger made 26 saves.

With a month still remaining in the regular season, the Stars are not about to pat themselves on the back about joining playoff-eligible teams.

“We don’t get fooled by the standings,” Dallas coach Rick Bowness said. “The most important thing is we play Dallas Stars hockey.”

The Ducks saw what that looks like first hand, facing a Dallas defense that did not allow a goal over the final 30 minutes and an offense that went on the attack until it finally broke through in the third period.

Hintz tied it when he camped in front of the Anaheim goal and lifted a pass from Jason Robertson over the left pad of Gibson. The game-winner came from Peterson on a two-on-one with John Klingberg, who recorded his 34th assist on the rush.

“I’m just trying to get open there,” said Peterson, who scored his 12th goal of the season. “(Klingberg) made the play with the sauce there. (We’re) just on a breakaway and then I put it five-hole. It was good to get that goal.”

The victory marked the return of Dallas defenseman Miro Heiskanen, who played 20 minutes after he was out for 11 games because of mononucleosis.

The Ducks welcomed aboard Urho Vaakanainen to help their struggling defense. After giving up six goals in their previous 11 penalty-kill opportunities, Anaheim held Dallas to no goals on three power-play chances Tuesday. Vaakanainen was acquired March 21 from the Boston Bruins.

But it was not enough to end the Ducks’ winless streak, which reached double digits (0-8-2). Gibson has not won a game in goal since March 1.

“Honestly, I just feel bad for Gibby,” said Ducks rookie Trevor Zegras, who had two assists. “… It’s one of the better games I’ve seen him play in terms of plays that should have been goals. He made four or five saves and I’m just sitting on the bench shaking my head. It’s definitely pretty devastating to not get the win for him.”