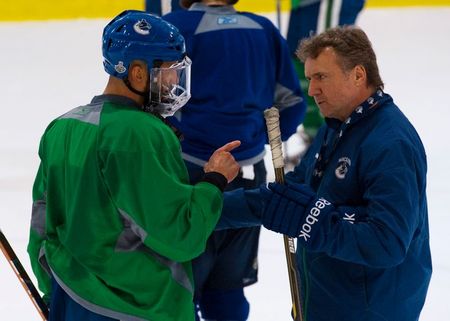 The Dallas Stars named Rick Bowness as their head coach on Thursday, rewarding the interim coach who guided them to the Stanley Cup Final.

He had been the interim head coach since Dec. 10, when the team fired Jim Montgomery for “unprofessional conduct.”

“The Stars are very excited to officially announce Rick as the team’s head coach,” general manager Jim Nill said. “After being called upon in a difficult situation, Rick stepped into the interim head coaching role seamlessly and used his unmatched experience to lead the team to a successful second half of the season and a spot in the Stanley Cup Final. Watching the team throughout our playoff experience, you really saw the team become his. His ability to connect with our players and our staff is remarkable.”

Bowness, 65, led Dallas to a 20-13-5 record in his 38 games at the helm. The Stars topped the Calgary Flames in six games in the first round of the playoffs, beat the Colorado Avalanche in seven games in the second round and defeated the Vegas Golden Knights in five games in the Western Conference final in the NHL bubble in Edmonton.

The Tampa Bay Lightning won the Stanley Cup Final in six games. It was the Stars’ first appearance in the final since 2000.

Bowness had been an assistant coach with the Stars since 2018, but he has served as a head coach in parts of five different decades.

“My wife Judy and I are thrilled to have this opportunity to continue our work here in Dallas,” Bowness said. “This team is very special for me. That time in Edmonton was unlike any experience I have ever had in hockey, and it brought us together as a staff and as a team. We had a great run to the Stanley Cup Final, but we have some unfinished business left and we’re looking forward to the opportunity to build on what we started.”