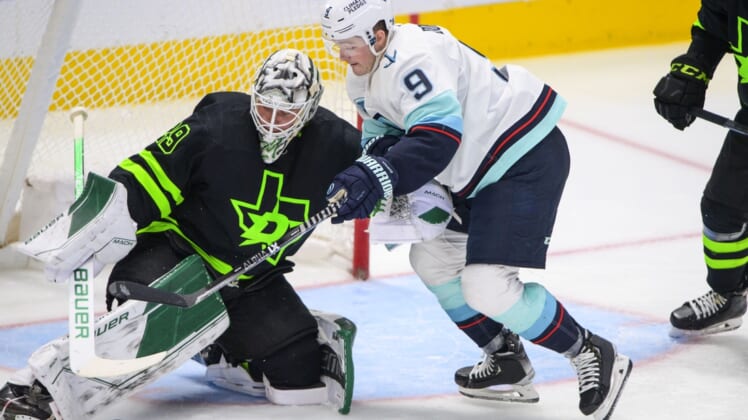 Riley Sheehan and Yanni Gourde scored for the Kraken (26-46-6, 58 points), who blew a two-goal, first-period lead for the second consecutive night after a 6-3 loss Friday at Minnesota. Goalie Chris Driedger stopped 28 of 31 shots.

Trailing 2-0, the Stars scored three goals in a span of 4:41 in the second period.

Hintz pulled the Stars within 2-1 at 6:53, finishing off a three-on-two break with Jason Robertson and Pavelski.

The Stars tied it on the power play at 8:58, as an entry pass into the Seattle zone deflected off Adam Larsson and fell right to Hintz, who blew past the defenseman and lifted a shot over Driedger.

Dallas took a 3-2 lead at 11:34 as Denis Gurianov stole the puck behind the Seattle net and fed a wide-open Namestnikov out front for a one-timer.

It appeared the Stars took the lead 2:48 into the first when Pavelski put the puck into an open net, but Seattle coach Dave Hakstol challenged the play and a video review determined Hintz was guilty of goalie interference, knocking Driedger out of position.

The Kraken instead took a 1-0 at 6:50 of the first, as Sheahan found a rebound of Larsson’s shot from the left point sitting just outside the crease and knocked it in.

Gourde made it 2-0 at 18:33 of the period, tipping Derrick Pouliot’s shot from the left point past Oettinger.

Seattle’s Matty Beniers had his five-game point streak snapped, one shy of the NHL record for a player at the start of their career for an expansion team, shared by Wayne Gretzky.