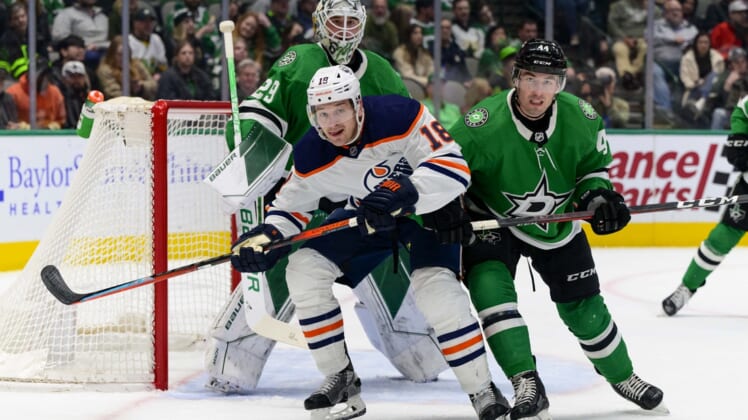 Roope Hintz and Denis Gurianov scored 24 seconds apart in the third period, and the Dallas Stars rallied for a 5-3 victory over the visiting Edmonton Oilers on Tuesday night.

Dallas led 2-1 and was on the power play when Edmonton’s Evander Kane won a puck chase and beat Dallas goalie Jake Oettinger (22 saves) to tie the contest at 6:14 into the third.

Just 43 seconds later, Leon Draisaitl crashed to the net, had the puck bounce off his skate, then apparently just off the stick of the Stars’ Ryan Suter, and in for his 42nd goal and a 3-2 lead for the Oilers.

However, Hintz got the puck in open ice, skated through three Oilers and slid it past Edmonton netminder Mikko Koskinen (23 saves) for the tying goal with 5:22 left. Less than a half-minute later, Gurianov converted off a two-on-one with Tyler Seguin to give Dallas a lead it wouldn’t relinquish.

Seguin recorded an empty-netter for his 300th career goal, while Jason Robertson netted his 31st and Joe Pavelski also scored for the Stars, who moved into playoff position in the Western Conference by winning for the third time in four games.

Kailer Yamamoto scored for the sixth time in seven contests and Connor McDavid extended his point streak to seven games with two assists for the Oilers, who had their six-game point run (5-0-1) come to an end.

With shots on goal at a premium in the first period (16 between the teams), the game’s first score wasn’t necessarily a high-percentage chance. However, Evan Bouchard’s drive from just inside the blue line made it through traffic and was redirected in by Yamamoto with 3:29 left. It was his 17th goal of the season.

Dallas didn’t record its first shot on goal of the second period until the 6:37 mark. However, Robertson made good when he wristed Jamie Benn’s pass by Koskinen to tie the contest and snap a four-game goal drought.

Dallas took the lead 1:20 later, on the power play, after Pavelski batted home the rebound of John Klingberg’s drive.