Stars pursuing right side of playoff bubble against fading Ducks 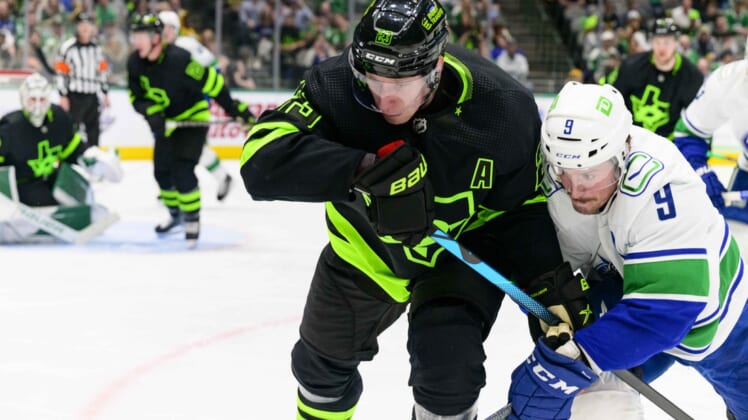 The Dallas Stars intend to jumpstart a late-season playoff push with a visit to Southern California where they will face the fading Anaheim Ducks twice in a span of three days.

The Stars head into Tuesday’s opener of the two-game set following a 4-1 home defeat to the Vancouver Canucks on Saturday. The game was tied heading into the third period before the Canucks took the lead a little more than a minute after the second intermission. Two goals in the final 1:06 accounted for the final score.

The Stars, currently 12th in the NHL in power-play percentage (22.7), failed to convert on any of their three opportunities with a man advantage. Two of those empty power plays came in the third period.

“When we needed a good power play, we got it, we just didn’t score,” Stars coach Rick Bowness said.

Saturday’s defeat, coupled with the Vegas Golden Knights’ 5-4 victory over the Chicago Blackhawks on Saturday, dropped the Stars out of the final wild-card spot in the Western Conference.

“We had enough to tie that game up at the end,” Stars center Joe Pavelski said. “You score one goal and you expect more. Chances or not, you’ve got to finish. We had some chances early. We pushed at the end, it was there, but the result we didn’t get.”

Tuesday’s game is the start of four consecutive on the road for Dallas. The Stars are 4-3-0 to open a stretch where they play nine of 11 games away from home. On the flip side, they play 10 of their last 14 at Dallas.

After showing early that they were ready to emerge from a roster rebuild ahead of schedule, the Ducks have now dropped nine consecutive games (0-7-2). Anaheim hasn’t won since it defeated the San Jose Sharks 3-2 in overtime on March 6, and the team enters Tuesday’s game off a 4-1 loss at San Jose on Saturday.

Anaheim had a 20-14 advantage on shots over the first two periods and still trailed 2-0.

“We needed to score in the first 10 (minutes),” Ducks coach Dallas Eakins said. “… All we had to do was bang one into the net. It could have easily been 2-0 or 3-0, but it wasn’t. That’s where frustration can build. I thought we managed that pretty well. It just came down to, when we needed to score, they got a save. When they got their opportunity, they buried it.”

The roster rebuild has hit the next stage after defensemen Nicolas Deslauriers, Hampus Lindholm and Josh Manson all were traded this month.

The departures have taken a toll. Over the Ducks’ last three games, opponents have scored goals on six of their 11 power-play chances.

The Ducks did welcome back veteran center Ryan Getzlaf on Saturday after the team captain missed nine games following a lower-body injury.