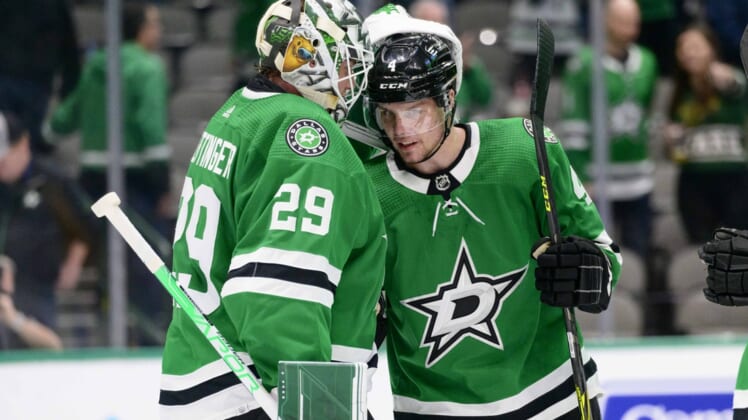 A little more than two months remain in the regular season, and the Dallas Stars and Winnipeg Jets have little room for error as they jockey for position in the playoff race.

Looking to rebound from a frustrating weekend defeat, the Stars will aim to continue their recent home success against the Jets on Wednesday night.

Both of these Central Division clubs are trying to find a way into playoff position in the Western Conference, but inconsistency remains an issue. Dallas had won nine of 12, but Sunday its season-high six-game road winning streak ended with a 3-1 loss at lowly Arizona, last in the West.

“We have to be at our best when the puck drops,” defenseman Miro Heiskanen said. “We have to play better than we did.”

Both the Stars and Jets are among six teams within 10 points of one another (through Monday’s games) in the race for the two Western Conference wild-card race spots, so games against each other are doubly important.

Dallas can start with some more consistent offensive production. In their past four games, they have just six goals, and four of those came in one game – a 4-1 win over league-leading Colorado on Feb. 15.

Roope Hintz recorded his team-leading 22nd goal Sunday against Arizona. Fifteen of his goals have come at home, where the Stars have won five in a row over Winnipeg, most recently 4-3 in overtime on Feb. 11, when Hintz assisted on Jason Robertson’s winner 3:10 into the extra session and Jake Oettinger stopped 31 shots.

Oettinger is 4-2 in February, starting all but one of Dallas’ seven games during the month, including the contest in Arizona when he gave up two goals on 26 shots before an empty netter made the final score 3-1.

Teammate Braden Holtby, whose only start this month came in a 4-0 loss to Colorado on Feb. 13, made 32 saves during a 4-3 shootout loss at Winnipeg on Nov. 2.

The Jets are four points behind Dallas and are looking to avoid a third consecutive loss. On Monday in Calgary, Winnipeg allowed the tie-breaking goal with 47 seconds left in regulation and ultimately fell 3-1.

“We need wins right now,” forward Pierre-Luc Dubois said. “We’re playing teams that we’re chasing right now. So for us to go to Dallas is a four-point game for us. So we’re going to have to be ready for that.”

Dubois ranks among the team leaders with 21 goals and 36 points but has just one point in his last five contests. He has scored in each of the two games with Dallas in 2021-22.

Teammate Mark Scheifele has more goals against Dallas than any other opponent, with 17 in 31 career games (and 20 assists) against the Stars. He has been blanked in Winnipeg’s last three games, since scoring a hat trick against Minnesota on Feb. 16.