Stars, Islanders to meet for first time since 2020 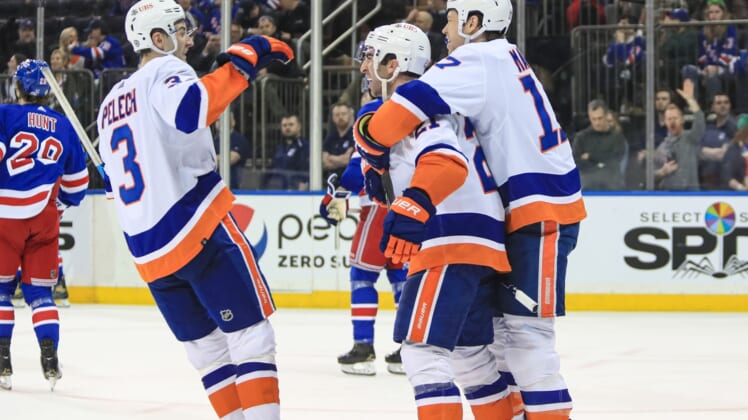 After facing a fellow unlikely COVID-era Stanley Cup finalist on Thursday night, the Dallas Stars finally get a glimpse at the team they could have met in the 2020 championship round.

The Stars will look to continue gaining ground in the Western Conference playoff race Saturday when they head to Elmont, N.Y., to play the New York Islanders for the first time in more than two years.

Both teams were off Friday after earning dramatic one-goal wins on the road Thursday night. John Klingberg scored the game-tying goal with 4:46 remaining in the third before scoring again with 10 seconds left in overtime to lift the Stars to a 4-3 win over the Montreal Canadiens.

Kyle Palmieri netted the tie-breaking goal with 2:44 left in the third period of the Islanders’ 2-1 victory over the New York Rangers.

The win was an especially timely one for the Stars, who snapped a three-game losing streak and remained one point behind the Vegas Golden Knights in the race for the second wild-card spot in the West, entering Friday.

Dallas, which was outscored 13-5 during its losing streak, fell behind 3-2 when the Canadiens — who reached the Stanley Cup Final last season after finishing with the 18th-most points in the regular season — scored twice in a span of less than four minutes around the midway point of the third.

The Stars are looking to return to the playoffs for the first time since 2020, when they ended the regular season with the fifth-most points in the Western Conference before reaching the Cup Final against the Tampa Bay Lightning, who earned a six-game victory in Edmonton.

After falling to the Lightning in the NHL semifinals in each of the last two seasons, the Islanders were expected to be a top Stanley Cup contender this season. But New York, which endured a COVID-19 outbreak in the midst of an 11-game losing streak from Nov. 7 through Dec. 5, ended Thursday 19 points out of the final Eastern Conference wild-card spot.

A five-game point streak (4-0-1) constructed entirely against playoff contenders has allowed the Islanders to display some of the mettle they developed over the last two years.

New York played the role of spoilers with wins over the Columbus Blue Jackets, Winnipeg Jets and Anaheim Ducks — all of whom are trying to scramble back into the race in their respective conferences — before falling in an eight-round shootout to the Washington Capitals and outlasting the rival Rangers in a spirited St. Patrick’s Day battle.

“That was a hell of a hockey game,” Islanders coach Barry Trotz said. “It was like a playoff-type game and those are enjoyable. No matter what the outcome is, those are fun.”

The Islanders and Stars didn’t play one another last season, when regular-season play consisted entirely of divisional games. The teams last played on Feb. 4, 2020, when Anthony Beauvillier scored in overtime to lift host New York to a 4-3 win in Brooklyn, N.Y.